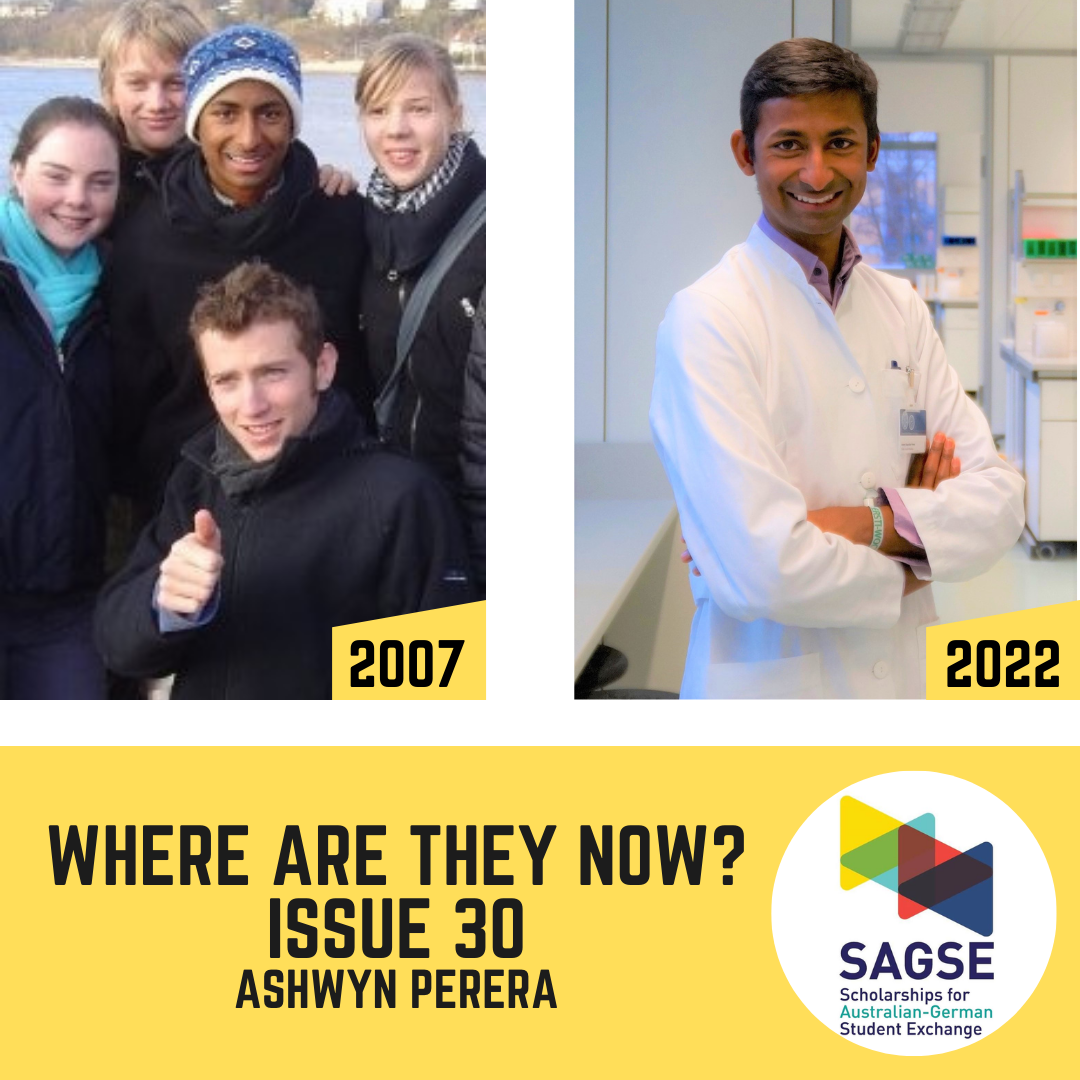 Greetings from Ashwyn Perera in Heidelberg, Germany. Ash was one of the stipis of 2007, the same year as last month's Holly Woodrow and Bianca Delbao, who was featured one year ago. After his exchange in the northern German town of Cadenberge, proudly sponsored by Siemens, Ash did an amazing array of diverse things, both in Australia and Germany, where he has now been more or less permanently for the last five years. He has made great contributions to SAGSE and GASS here in Victoria, but also to our sister organisation GDANSA whilst over in Germany, in between doing research on children's cancer at the German Centre for Cancer Research.

A lasting memory from your Exchange

On the first evening with my host family we had Spargelsuppe for dinner, my host siblings were quite excited about it - for me, it was the first time I had seen white asparagus stalks in broth - and I remember thinking what a strange country Germany is!
Studies on return from Exchange
After finishing Year 12 and having a fun year off, I studied a Bachelor of Science at Melbourne Uni, during which I did semester abroad at the University of Freiburg. I then came back and completed an Honours in Neuroscience. Along the way I tried to keep my German up with a Diploma of Languages.

Career path since then

Since then I have worked in biomedical research in a bunch of different labs, all with a common theme of studying the genetics of the nervous system. This included looking at diseases such as multiple sclerosis, autism, deafness, as well as understanding the gut-brain axis. After beginning my research in Melbourne, the Australian-German Association Fellowship program (which I can highly recommend!) got me working in a lab in Freiburg, a cute little southern German uni town near the Black Forest. I then made the big move to complete my medical training in Heidelberg (the Germany one, not the Melbourne one!).

Und jetzt? – And now? What are you doing now?

I have now been living in Heidelberg for the last 5 years (what!) and am based at the German Cancer Research Center (DKFZ) in the Division of Pediatric Glioma Research, trying to figure out why children's brain tumors grow so fast and what we can do to stop them. Since living in Germany I also try to help out SAGSE's sister organisation, GDANSA, where I can (e.g. with applicant interviews, Australian Embassy visits in Berlin, and trying to find new sponsors!) - to make sure our beloved exchange program keeps on keeping on!

How the SAGSE Exchange experience influenced your life journey

Where to start! Our exchange was where the fun started and going to Germany as a 17-year old without really knowing what to expect was one of the best things that ever happened me. In fact, everyone should have the opportunity to go on exchange in their youth - being able to move to a completely different country, operate in a different language, come to terms with completely different surroundings - and then to feel comfortable in this new environment - is one of the most liberating feelings. It lets you grow in character in ways other experiences don't. And it gave me the confidence to do it again and again - going abroad for university exchange, for internships and for work. Having such confidence gave me endless opportunities looking into the future.
Nearly 15 years on, one thing led to another and I find myself now living in Germany. Thinking back, the opportunities that I took to get myself here (and the courage required along the way) can be traced back to the people and experiences from the SAGSE exchange, which has proven to be a pivotal experience in my life so far!