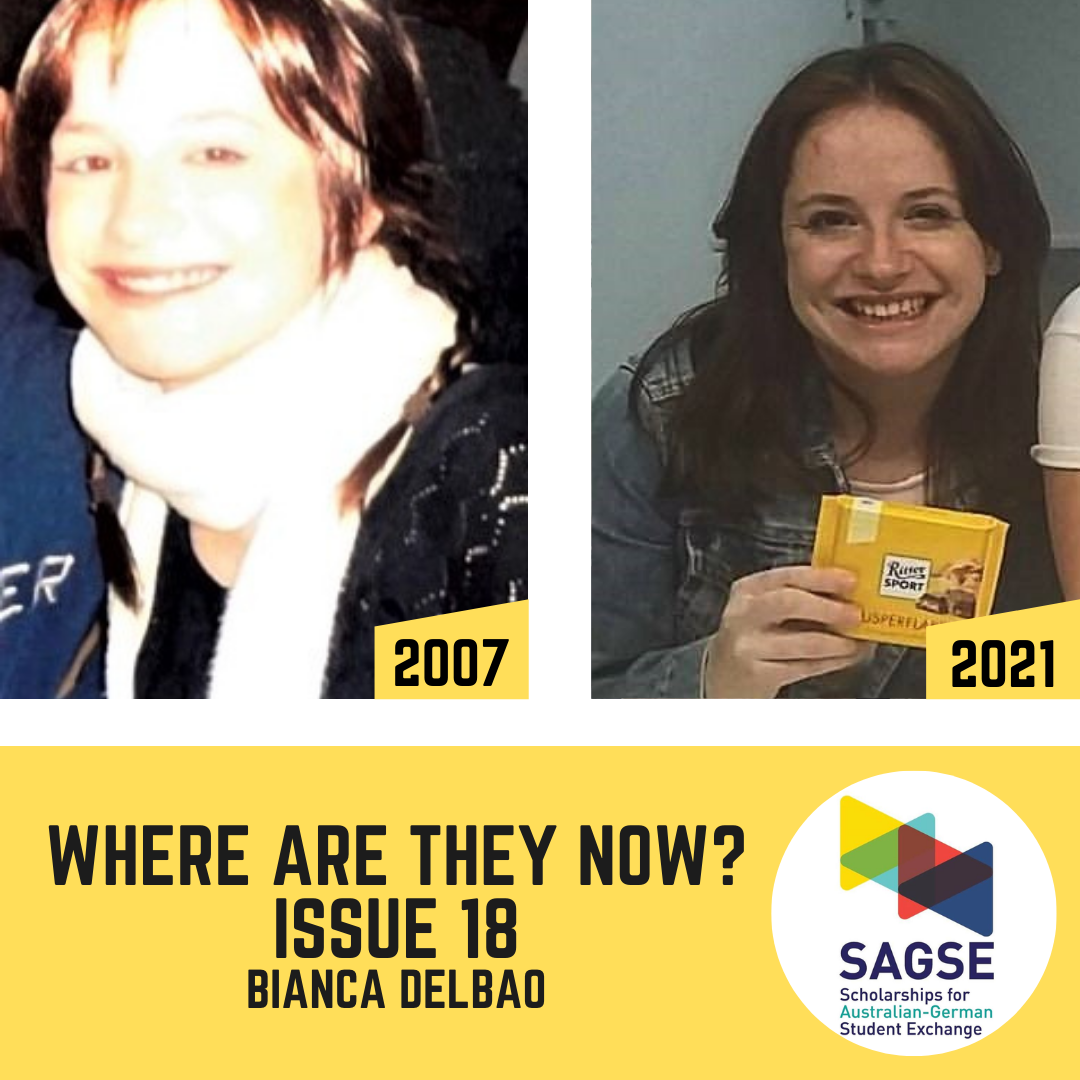 It is always great to hear back from our former Stipis, wherever they are in the world, doing amazing things. This month we go back to 2007, when Bianca Delbao was a student at Figtree High School in Wollongong, NSW, who successfully applied for a SAGSE scholarship. This took her off to Steinhagen and set her life on a path which would take her back to Germany many times and ultimately on to Ireland. She was part of the team which took Trivago from a small German start-up to what it is today, and she ended up being their Global Head of Communications and their spokesperson in Australia and New Zealand.

Bianca is pictured on her exchange in 2007 (left) and when visiting Germany in 2019 stocking up on essentials (right).

Memories from your exchange:
I strongly recall the time that I completely embraced the exchange and the German language. It was a few weeks in, I was still trying to be a perfectionist with the language and was lacking the confidence to give it a try and to make mistakes. One day the button on my coat fell off and I wanted to ask my host dad for a safety pin to keep my jacket in place until I could sew it back on, the only thing was I had no idea what a safety pin was called in German. I tried my best to explain it to him, I tried saying it in English but he didn't know a word of English, I tried describing it but he just wasn't getting it. I completely broke down crying because nobody could understand me, I was missing home, it was really cold, and was finding the experience frustrating. But for some reason getting that out of my system was just what I needed to realise that for this to work, I need to give it my everything, mistakes and all if I am to make it through. Just like magic, it worked, my German improved greatly and enjoyed my time so much more from that point on. I also will never forget the word Sicherheitsnadel.

Studies on return from exchange:
Bachelor of Commerce at the University of Wollongong

Career path:
The day after I graduated with my Bachelors I moved to Duisburg, Germany. With the help of Egon Vetter from SAGSE, I was offered a six-month graduate position in Product Management and Marketing at a chemical company for car manufacturing. I then moved to Dusseldorf and started working for Trivago, which at the time was a small German travel-tech company. I helped launch the company in Australia and New Zealand but from Germany and moved into a Communications role within the business as it grew. I was then part of the core team responsible for Trivago's IPO when it listed on NASDAQ in 2016. My last role in the company was as the Global Head of Communications. Following that, I moved to Dublin, Ireland where I worked as the VP of Communications at Web Summit, a global tech conference company. Throughout my entire career, I have worked either in Germany, with the German market or in the German language, even in Dublin. Being comfortable with the language even to this day has proven very useful for my career.

What are you doing now?
I'm currently still based in Dublin halfway through completing an Executive MBA at UCD Michael Smurfit Graduate Business School. I have also made the move recently out of the Communications profession and decided to reskill. I now work for Accenture in their global IT organisation called CIO, working in technological change management. I have a passion for all things tech which flourished when I was living in Germany, so although I've changed jobs, I'll remain in an industry that I love.

How the SAGSE exchange experience influenced your life's journey:
The exchange played a huge role in where I am today, both personally and professionally. For starters, the exchange was my first long-haul flight and proper overseas trip, I had only been to New Zealand before that. I fell in love with the country, so much so that when I returned to Australia and began my studies, I would travel back there each year with others from my year group, many of which are still my closest friends today. I had done this three times before taking the leap and moving to Germany permanently when I was 22 years old.

Within my first two weeks of moving to Germany, I made a new friend who helped me settle into German working life. This person is now my husband. We got married in 2016 in Belize, two of my closest friends who are also Gassies from my year group, Laura and Steph, and my two host sisters Inke and Sonja all travelled to Central America to celebrate.

Since my exchange, I have kept in close contact with my host family. Steinhagen is only a couple of hours north of Duesseldorf where we were living so we would visit quite often whether it be for birthdays, Christmas, Easter or just a catch-up. Whenever my parents come to visit me from Australia we always take a trip to Steinhagen to spend time together. I've also brought two cousins of mine to my host family's home, one joined me for Christmas in 2009 when we did a Germany trip together with other Gassies, and another came with me for Easter a few years ago, she was over studying in Sweden. Even during COVID, we've been video calling each other and I can't wait until we're able to travel again so I can see them. They very much consider me part of the family and I do too, they are my family over here.

Further Comments:
Just some advice for anyone going on this exchange, really give it everything you've got. It is such a rare opportunity and unique experience to fully immerse yourself in a culture and language like that. Make the most of every minute because, like me, it could shape who you are and could one day change your life for the better.

SOS for SAGSE NSW!!
Sadly, SAGSE NSW is not currently a registered body with the relevant authorities in the State. We are seeking volunteers to form a new committee and bring it back to life, so that young and talented people, like Bianca, may once again have this wonderful opportunity. People of all different demographics and with a broad range of skill-sets are required to form such a committee, and we already have a few offers. If you would like to join them and bring this important tradition back to life, please email Warren at alumni.vic@sagse.org.au and I'll get you in touch with the relevant people. When SAGSE does get going again post-COVID, we anticipate a lot of interest and it would be great to have NSW back on board by then.