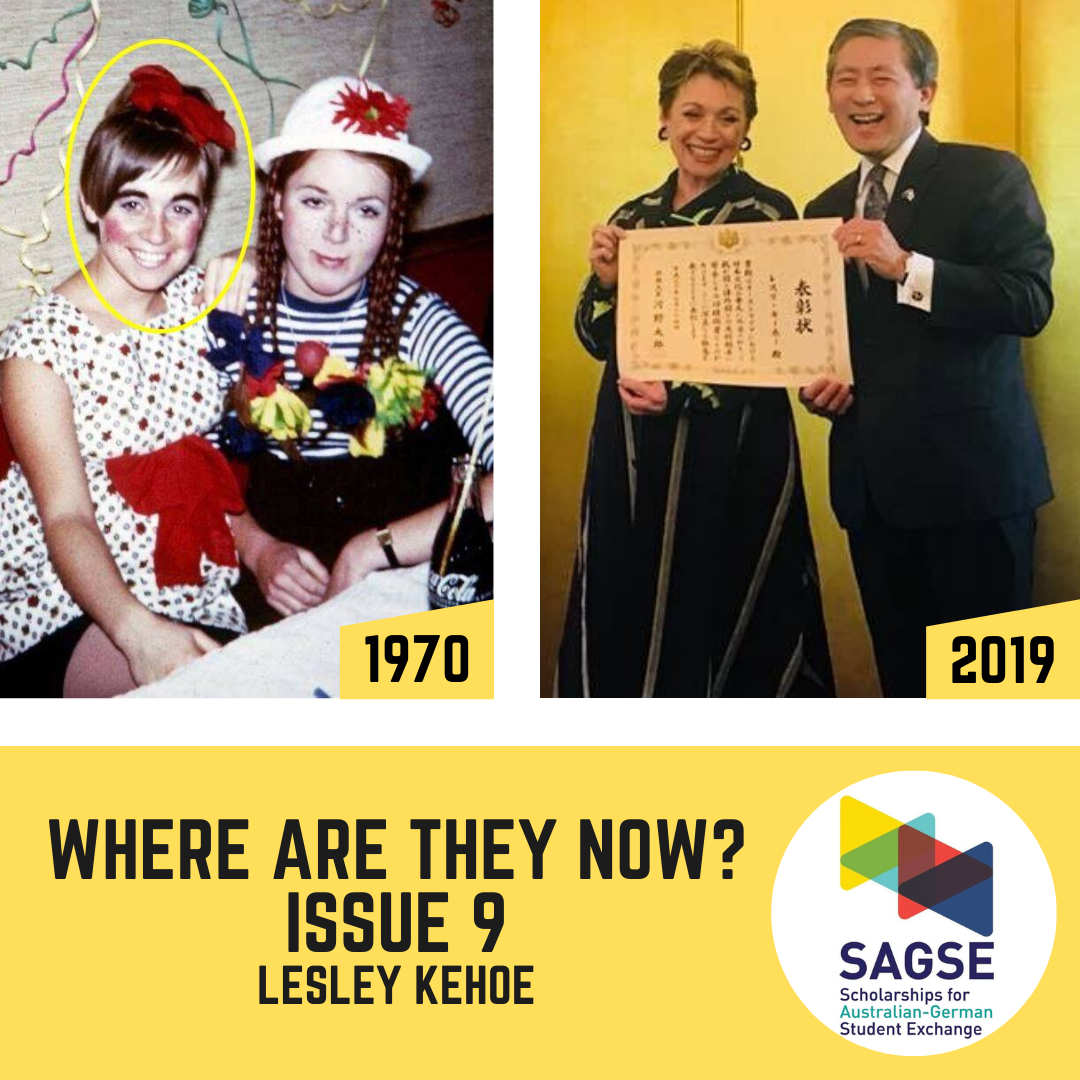 On the left, Lesley is enjoying a Fasching celebration. On the right, Lesley is pictured receiving her Commendation from the Japanese Consul General Mr Matsunaga Kazuyoshi.


An Interview with Lesley

Year of exchange: 1969/1970 I recall being asked in my scholarship interview how I would respond to questions in Germany about the White Australia Policy!

Town of exchange in Germany: Geradstetten (near Stuttgart) Click here to see an article on our visit to the 'Oberbürgermeister' of Stuttgart.

I am still in touch with the Koehler Family; both host parents have passed away, but the youngest member of the family Ron lives in Sydney and is Vice-President of the German-Australian Chamber of Industry and Commerce, and second in the family has visited Melbourne twice, the most recent in 2019.

Memories from your exchange:

I was picked up at Frankfurt airport in a luxury Mercedes and driven to Geradstetten via Heidelberger Schloss where I enjoyed my first hei√üe Schokolade mit Sahne!

A 5-day seminar in West Berlin about the politics of the divided city and finding I could understand the language, highly stimulating!

Attendance at one of the first performances of ‚‘Haare' in Berlin with the daughter of Mayor.

Going through Checkpoint Charlie to East Berlin, with armed soldiers checking the bus.

My host family laughing at my ‚‘winter coat' and the difficulty finding something to fit in a country where everyone seemed to be over 6 feet tall!

I completed a Bachelor of Arts with Double Honours in Japanese and Sociology. In my first year of German I was awarded The Goethe Prize. I went on to complete a Master of Arts in Japanese.

I undertook significant interpreting and translation projects for major Australian companies, and was then the Assistant Manufacturing Manager of Pacific Can Pty Ltd, a joint Australia-Japan venture. In 1985 I established Lesley Kehoe Galleries, which I still run today.

To say the experience changed my life is an understatement. It was my host father, Rolf Koehler, who questioned my choice of 4 languages at Melbourne University. He had been employed by Volkswagen and had spent a number of years in Australia. When questioned about my career choices he graciously did not laugh at my ‚‘simultaneous interpreter at the UN', but did point out that my competition would be bilingual and trilingual speakers from birth. He then pointed out that Australia was part of Asia, decades before any similar realization and discussion in this country, and that very few people knew anything about Asia. I recall the decision to study Japanese and move my enrolment to Monash University was taken in the car at a green light one morning on the way to school. Melb Uni had only minor studies in Japanese.

Monash had a quota for Japanese and as we arrived back in Australia after the commencement of the academic year, it was filled. I had to fight to be admitted. They refused. I sought assistance from the Dean and the conditions of the scholarship that we would not in any way be disadvantaged by our late return and was eventually admitted. From a rather large first year enrolment, only 4 students made it to Honours Year. Japanese makes all those German cases look so easy!

As a former 'Stipi' like Lesley you can visit

where you can take out / renew your SAGSE membership and / or make a donation to the SAGSE Victoria Alumni Scholarship. Our goal is to continue to send at least one scholarship recipient per year, fully funded by alumni donations, and every bit helps.

Lesley sent in a personal letter she wrote to her host father for his 85th birthday. She has redacted the really personal bits which is attached  here for you to read with her permission. It is a lovely reflection of the journey of growing to maturity and making key life decisions, which so many of us who have been on exchange can really relate to. Thanks for sharing it with us Lesley.