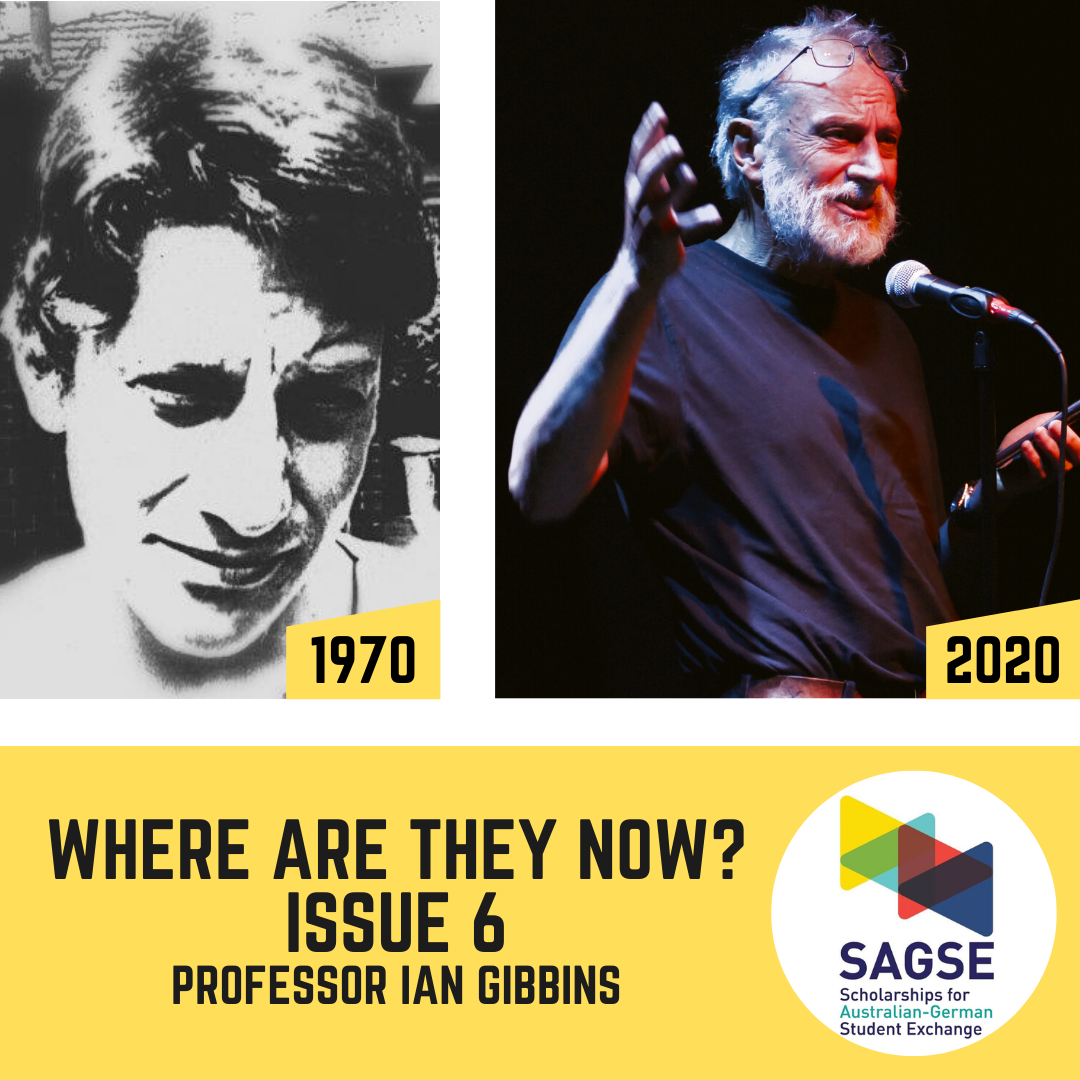 As the world enters a phase in which the SAGSE Exchange from Germany to Australia is suspended for the first time in 53 years, we continue to look at what has become of some of our many hundreds of Aussie GASSies from these years. Today we go almost right back to our origins and I have great pleasure in introducing you to Rennaissance man Ian Gibbins, who went on his exchange 50 years ago!

You can also have a look at some alumni from our friends in SAGSE Queensland here: Qld Alumni profiles

An Interview with Ian

A memory from your exchange:

So many… going to school full time, having cakes and beer at lunchtime; trying to learn to ski in a year with very little snow; visiting experimental jazz clubs; weekend trips to Bad Mergentheim for lunch with Oma; long forest walks looking out for bomb craters; concerts in Baroque palaces; kids in the family complaining that I spoke too much English, but it wasn't proper English anyway…

First up, I finished Year 12 doing a mixture of sciences and languages, including German and Latin. I then went to Melbourne University majoring in Zoology, completing my PhD in 1980.

After my PhD, I was a post-doctoral researcher in pharmacology departments in the USA for two years (1982-84), initially at UCLA and then the University of Vermont. In 1984, I came to Flinders University, Adelaide, supported by a Fellowship from the National Heart Foundation. After a year there, I gained a lectureship in Anatomy in the School of Medicine and set up my own laboratory researching the microscopic structure and function of nerves controlling the internal organs. My career at Flinders was long and productive. I ended up being Professor of Anatomy for 20 years, and had a major role in developing, running and teaching Australia's first graduate entry medical course. I also ran the University's central microscopy research facility. Along the way, I won awards for my teaching, research, and public science communication.

I retired in 2014 and I am now a widely published poet, video artist and electronic musician. I have four books of poetry and my videos are shown regularly at festivals and galleries all around the world. I've had several public art video or audio installations in Adelaide and I've exhibited in several group shows. I have a major role in running the Adelaide Festival of Ideas. I also support the local poetry and spoken word community by building and running websites for various groups and helping run events. When conditions are appropriate (strong winds, big waves), I go windsurfing…

How has the SAGSE exchange experience influenced your life's journey:

Very directly indeed! I had always wanted to be a scientist but no one in my family had any scientific background. The father in my German family was a Clinical Chemist at the University, and he often used to take me to visit his laboratory or those of his colleagues. So I saw first-hand something of the academic-scientific life, and I was hooked. But my family was also deeply immersed in cultural and sporting pursuits too, and it was clear that science, art and leisure were not mutually exclusive pursuits.

My knowledge of German language and lifestyle also became part of my scientific career and community. I developed close contacts with colleagues in Germany soon after I came to Flinders. We maintained those connections for 30 years, collaborating and exchanging students. Indeed, a former student of one of my closest German colleagues took over from me as Professor Anatomy at Flinders when I retired.

There is no doubt my exchange to Germany was a critical point in my life. My experience in Germany is as much a part of me as anything else I have done before or since. Unfortunately, I've lost contact with my German family for a while now, but they still live strong within me.