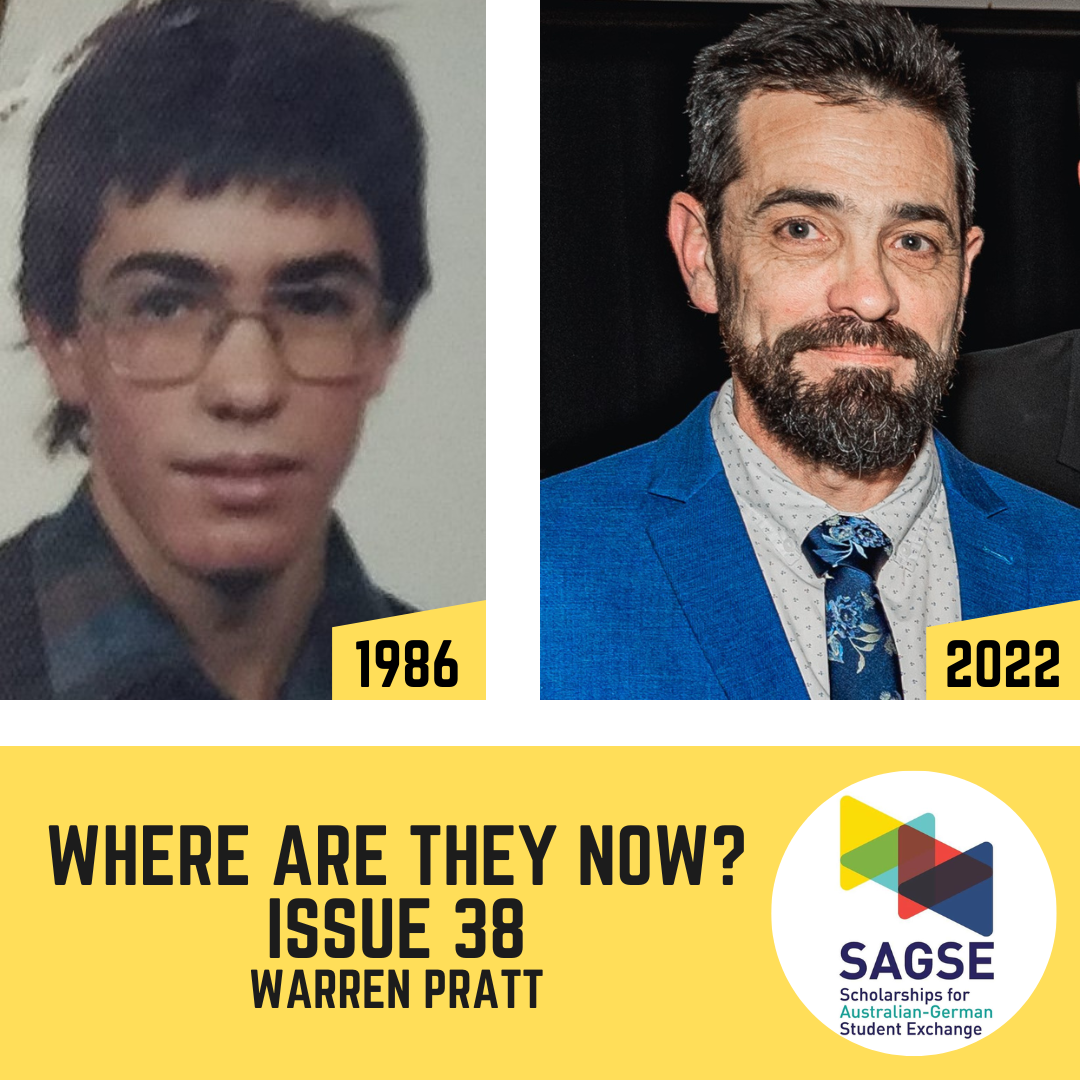 Our first issue of WATN for 2023 is someone who has been single-handedly reconnecting and celebrating SAGSE alumni for years. He is also contributing significantly towards the creation of a new generation of GASSies through his impassioned teaching of German to secondary school students which has produced 18 scholarship recipients so far. Of course, I am referring to the tireless and incomparable Warren Pratt! Read on to learn of his adventures, starting out in Mt Gambier, SA, before his SAGSE experience changed his life and compelled him to pursue a career teaching German.

Some Lasting Memories from your Exchange

On a freezing cold day, I accompanied my host mum out to a place selling Christmas trees. I figured this would be a simple operation, so I left my gloves, scarf and beanie in the car. Fatal error. We proceeded to inspect what seemed like every one of the hundreds of trees on offer, each summarised with something like ‘Der ist süβ!’ or ‘Nein, der ist zu dünn’. When approaching the stage that I felt I was going to start losing some fingers to frostbite, I probably lost a bit of patience and stated bluntly, ‘Ein Christbaum ist ein Christbaum!’ This sentence became something of what would these days be called a meme in the family. it was later embellished to ‘Christbaum ist doch Christbaum!’ (If only my German had been that good at the time….!) The experience taught me two important lessons. Firstly, always be prepared for super-cold weather in a European winter. Secondly, when you’re dealing with a tradition as strong and important as Christmas in Bavaria, sometimes a laid-back Aussie attitude towards things as crucial as Christmas tree selection just doesn’t cut it!

Other more profound memories have lasted just as well – seeing my first snow ever and building my first snowman just before the white Christmas we enjoyed, the Christmas markets, and of course the journey through the East on the ‘Transit-Strecken’ to Berlin for our last few days in Germany. Walking down to the Wall at night with the eerie floodlights illuminating all, travelling through to East Berlin on the subway with our compulsory DM25 exchanged for 25 Ost-Mark which was impossible to spend on a Sunday. We were supposed to give back what we didn’t spend, but I still have a 5 Ost-Mark note and lots of aluminium coins from that day.

I had finished High School, actually receiving my Year 12 ‘Matriculation’ results over the phone whilst in Regensburg. On return to Australia I went straight to Adelaide to study German, what else?! There was a really active German Club at the Uni which performed a play every year, and I had a great time acting very badly in Die Chinesische Mauer, Biedermann und die Brandstifter and Romulus der Groβe. After my BA I went back to Germany to do a course in Freiburg, which began just a couple of weeks after the fall of the Wall we had stared at and felt to be impenetrable just a couple of years prior. Of course the first thing they did was to pack us into a bus and take us to Berlin, where we got into the spirit – hacking away bits of wall which I brought back to Australia as gifts and to keep as a memory of the living history we experienced. Back in Adelaide I did a Graduate Diploma in Education, as there was nothing else I considered doing other than becoming a German teacher. Then it was 3 years back in Europe, mostly in Germany and working in a pub in England, but with lots of backpacking around in between, as far afield as Norway, Poland, Hungary and Italy.

As well as my day job, which keeps me busy enough, I have discovered a love for cricket. I played a few seasons as a bit of a mid-life crisis in my mid-40’s, but then realised I could maybe offer more to the game as an umpire. So for about 8 seasons now I have been a community cricket umpire, the last few at the highest level in Melbourne’s Eastern Cricket Association, as well as umpiring Juniors.

How did the SAGSE Exchange influence your life's journey?

It was my first time on a ‘big’ plane and an eye-opener. A young country lad suddenly experiencing the cold war first-hand and proudly being shown Hamburg’s red-light district by someone else’s host dad was a very sudden way to grow up and see what is out there in the world. I forged many lasting connections to Germans, New Zealanders and the other Aussie ‘stipis’, some of which are still intact today. In fact, at my current school I have taught two sons of one of my fellow stipis from my year and a few others from other years!

SAGSE remains important to me and I was proud to be able to attend the 50th anniversary celebrations in both Melbourne and Hamburg. I have had 18 students in total from the three schools I have worked at go on the exchange and one of them is in Germany right now.

Maybe there’s one more professional challenge ahead. Or maybe I’ll just fade away into retirement in a few years, doing more cricket umpiring and private tutoring to pay the bills. And maybe one day I can hit that sweet spot in the middle of the Venn diagram of my two passions in life. I would love to umpire a game of cricket in Germany. I nearly made that happen in Austria in 2019, but it’s still on the bucket list.

I think it’s really important that we alumni give something back, as we all had an amazing experience which must not be taken for granted. I’ll be rattling the can for donations amongst my Jahrgang when we have our 40th anniversary in a couple of years’ time, and my hope is that each year at least one other anniversary Jahrgang will do the same, to create just one more scholarship opportunity each year, plus a general one from alumni donations. Any alumni out there with money to offer, please become a member and make an alumni scholarship donation. But if you have time to offer, please contact us about joining our volunteer committee. Or if you are in NSW, we desperately need some boots on the ground there to mobilise and basically re-instate SAGSE. It can be a lot of work, but when you see the faces of the youngsters coming back from exchange and hear their stories, it’s all worth it!

In February we will hear from someone who went on exchange with Jasmine Nguyen and has now moved to Serbia.