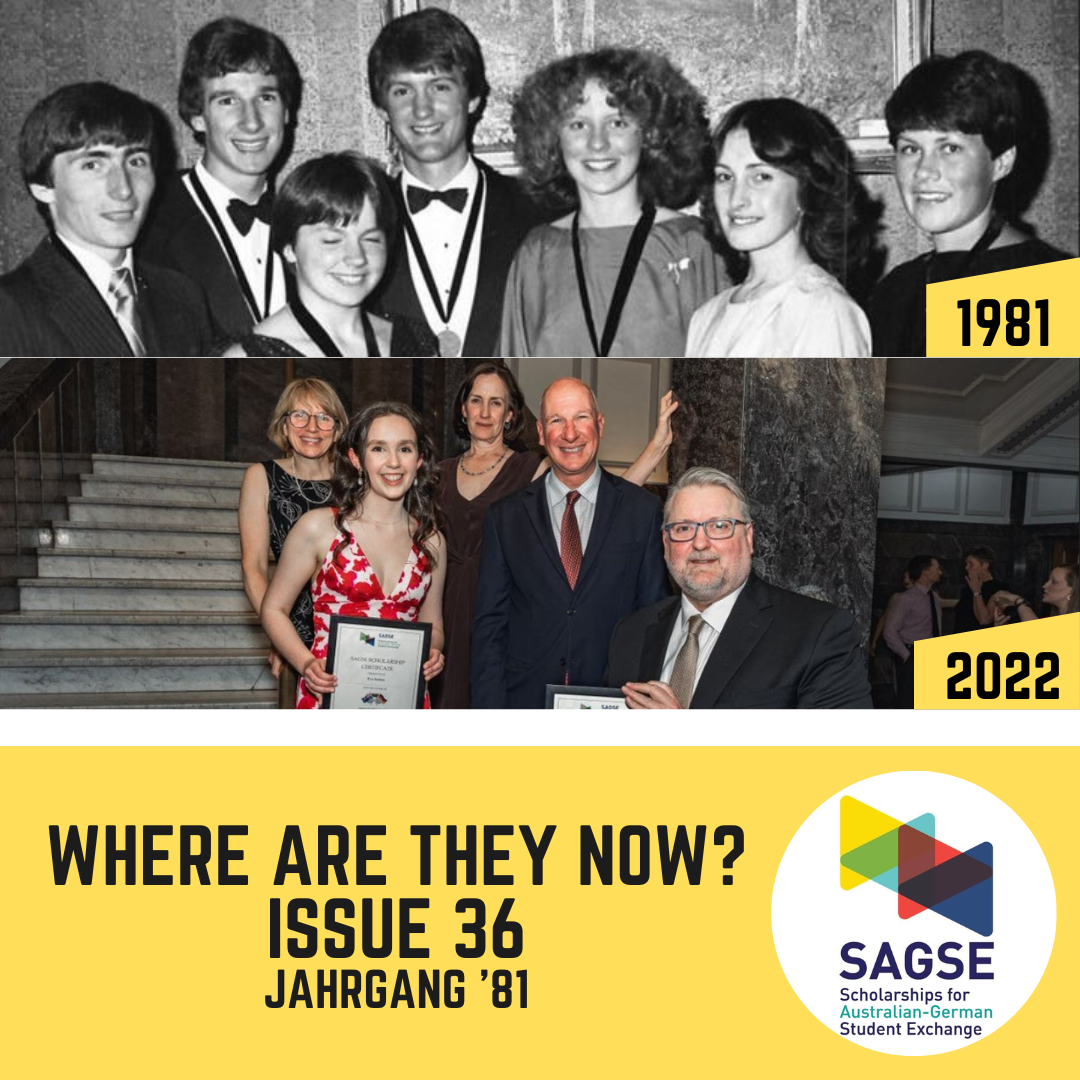 A look in our Past, Present and Future - SPECIAL EDITION Jahrgang 1981!

A very special edition this month comes to you from a very special group of Stipis - those we sent from Victoria way back in 1981. For their 40th anniversary they generously decided to share the cost of a whole additional scholarship. Due to the COVID cancellation of the program in 2021, that scholarship was presented in our recent 2022 Gala Dinner to Eva Sutton of Caulfield Grammar School.

Members of the Class of '81 have provided us with a brief bio and you can read all about Lisa at https://www.sagse.org.au/news/where-are-they-now-issue-5.

My story: The highlight of my exchange was attending English class at school – so easy. After finishing HSC, I went on to Uni to complete a Computer Science degree. Thinking I was going to have a life as a techie, I was swallowed up by IBM. After 12 months of orientation with IBM my career changed and I became a sales representative. I have been in sales for the last 35 years. I stepped out of IBM after 21 years having done a range of sales and sales manager roles, and joined a systems integrator. A big highlight here was I won a ticket to Virgin Galactic’s Spaceflight – a 90-minute journey into space. Did I go? Well, that’s another story. After 4 years I attempted to set up my own business with a couple of colleagues. We got bought out after 2 years and I have been at Advent One - a systems integrator based in Melbourne, Adelaide and Sydney. Most recently I am leading the Cyber Security business at Advent One and all I can say is “It’s a scary place when you’re on the internet”.

My story: The highlight of my exchange was the final week in Bonn and especially Berlin, when we all got together and had the time of our lives.  Plus I'm so pleased I visited the divided city of Berlin, which is so different and so beautiful now.  It sends shivers down my spine every time I walk under the Brandenburg Gate. After the exchange I completed an Honours Arts degree (majoring in History) at Melbourne University in 1985.  Worked for a couple of years in management consulting, then accepted a teaching position at Melbourne Grammar, where I have been for 34 years.  I teach history exclusively now, but I did teach Year 9 beginners German for a couple of years.  I married Gilly in 1990 and we have three children (Tom 31, Anna 29 and Kate 26).

Town / city of exchange in Germany: with Familie Holzapfel in a little village, Gensungen-Felsberg, near Kassel in Hessen

My story: My host sister and I and a bunch of her friends went tobogganing one night, speeding down a snowy track through the forest in the moonlight, starting from the ruined castle at the top of the Heiligenberg all the way to the bottom. Quite magical. And with my Jahrgang during our trip to Lübeck where we stayed in an old converted ship in the middle of nowhere. Somehow we got caught in a blizzard near the East German border and as we stumbled about we ran into signs reading "Halt Hier Grenze". I remember being terrified we were going to tread on a landmine! After studying economics at Melbourne Uni, I was fortunate to do a 3-month internship at Hapag-Lloyd in Hamburg. This helped me secure a graduate position at P&O Containers (and later allowed me to work in Hamburg again as part of a 2-year secondment to Europe). On returning to Australia I eventually shifted out of shipping and I've become a Change Management Specialist. I'm married with 3 boys; when they were still very young we moved overseas, living in France, Singapore and the UK. We're now all back in Melbourne and I'm currently working on Transformation programs with the Victorian government.

My story: The highlight of my SAGSE trip was visiting the beautiful Weihnachtsmarkt in the Staufen town centre with my host family. After returning from exchange, I went straight into an Arts/Law degree at Monash University, which led me to visit Germany again in 1983/84, studying literature for six months at Cologne University.  I worked in publishing for a stint, after which my legal grounding led me to a career at State Trustees, specialising in wills and estates, litigation, disability law, and financial services and corporate law.  In my current role as General Counsel and Head of Corporate Legal, I enjoy grappling with intriguing legal and policy challenges on an almost daily basis.  I’ve been blessed along the way to marry and share in forging a family that includes three healthy boys and two selfish cats.  I still get to use my German occasionally (and not just when singing 99 Luftballons in the shower): My line of work means I’m sometimes called on to reach out to non-English-speaking beneficiaries in Germany about the financial affairs of a loved one who has died. Although it can at times be confronting, it is also heartening to experience how language can help people gain resolution and closure.

Town / city of exchange in Germany: Lübeck with Familie Wruck

My story: So many highlights to choose from but we were very lucky to have a cold and snowy December. For Christmas, I was given some ice skates and we were able to skate on the frozen river behind our house. We also went ice skating on a lake that was in the West on one side and the East on the other, complete with border guards in the distance... not so relaxing. I'm told it has only frozen over once since 1981. After my exchange I studied Science and then Audiology at Melbourne University, worked for a short while in Melbourne before heading off to Europe and the USA. Prior to starting work in the UK, I spent another 2 months in Germany, mainly based in Braunschweig where my host sister was studying. We have been back in Melbourne since 1993, busy working and raising 3 children. Hoping to visit Lübeck and Berlin in 2023. And I still love Niederegger Marzipan!

Town / city of exchange in Germany: Familie Pringsheim in Passau, at the confluence of the Inn, Ilz and Danube rivers, on the border of Austria.

My story: Our house backed on to the forest, and the three boys next door used to take me 'langlaufen' - cross country skiing. They also had a host son, Richard, and when we discovered that we would be living next door we made a pact to only speak German. It paid off - after three months we were both fluent. My host father was the French Horn in the Passau opera, and when it snowed and people from the surrounding countryside could not make the performance he would take me and I would sit in one of the boxes of the beautiful chamber theatre and listen to divine music at close range. After my exchange I studied English, German and Philosophy at Melbourne Uni, did a second degree in Theology and then a Dip Ed. I taught at Wesley College (including a brief stint teaching German) but then I gave up my 'day job' to become an actor. I often play complicated and emotional patients for doctors who want to practice having challenging conversations. I can occasionally be seen on television, and play the lead in upcoming feature film COMA. I am also working on an international theatre collaboration about Goethe and a famous Persian poet called Hafiz, and their missing muses.

Town / city of exchange in Germany: with Familie Schultz-Gehardht in a little village called Sprockhoevel near Wuppertal.

My story: Two memorable highlights are tobogganing for hours in the wood literally down the road from the old Fachwerkhaus that I was living in, with my host sister and brother. The snow was metres thick and I couldn't believe we could just take the toboggans out of the shed, walk a few metres and slide through a fabulous run through the trees - so close by! The other great memory was arriving in Lübeck for the winter GASS gathering and seeing this amazing tall ship moored, and realising that was where we were staying! (The few days and night there were a hoot too - let's say a few snow fights, traipses across frozen water, and ..well...say no more....). After the exchange, I finished school then studied Honours German and Psychology at Melbourne Uni. Travelled overseas again and then ended up in Western Australia in Kalgoorlie working at the College there during the mining boom with my geologist partner. My first son was born there. Went back to the eastern states and have spent most of my life in Sydney, working in the non-profit sector and for the past 12 years for the NSW Government in various management and senior executive roles. I am currently heading up whole of government programs for women's and community safety at the Department of Communities and Justice. My partner and I have three sons and now are proud grandparents of three gorgeous girls.

The 'Jahrgang '81' has set the bar high! A relatively small number of SAGSE alumni who have kept in touch over the years were able to contribute a whole scholarship to mark their 40th anniversary. Will your year group celebrate a 10th, 20th, 30th, 40th or 50th anniversary in 2023? Maybe it's time to send a few emails around and get the gang back together for a catch-up and see if you can emulate this achievement!