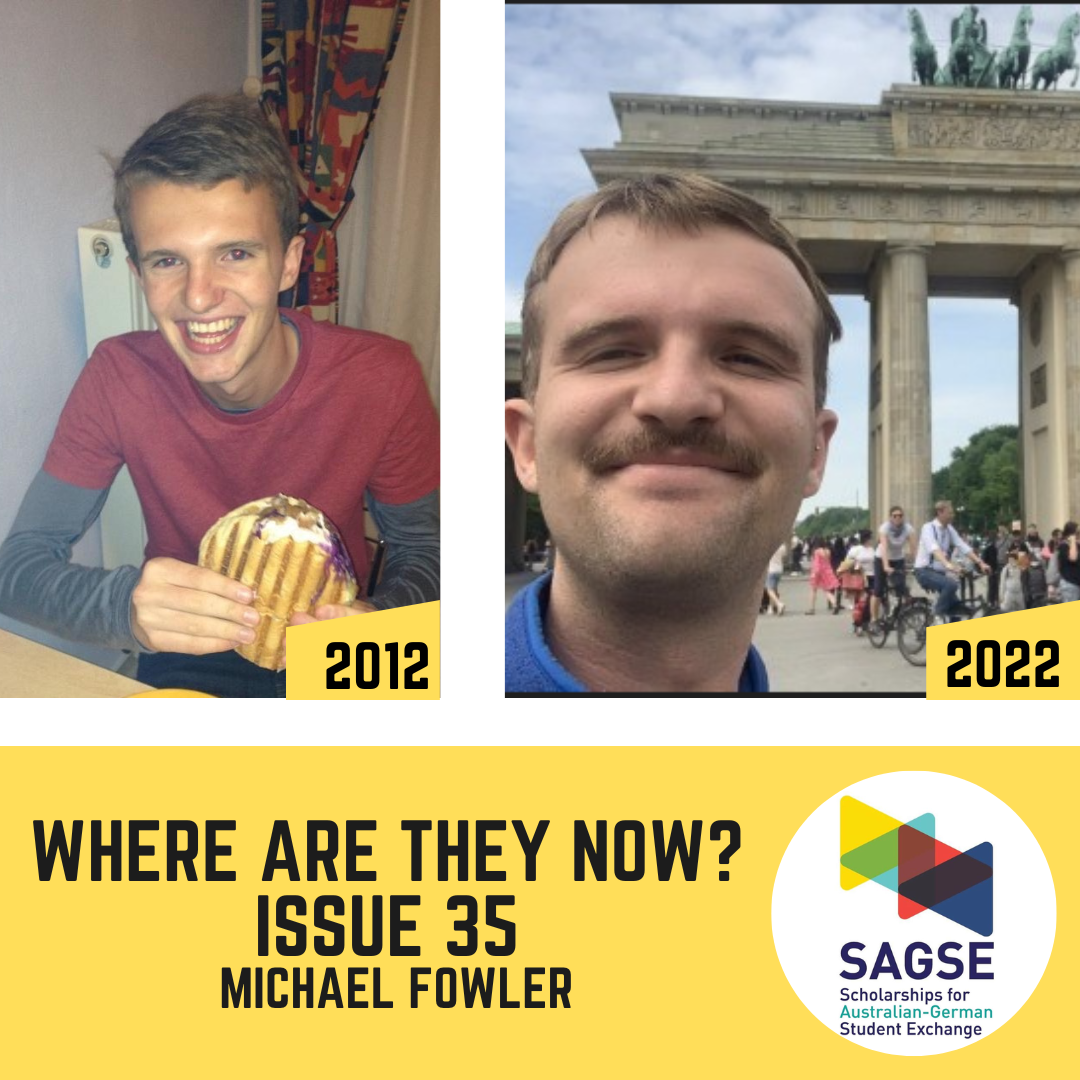 This month's candidate comes from Sydney via Halle an der Saale via Melbourne via Albania via Kilimanjaro. After his SAGSE Exchange in Halle, Michael landed his dream journalism job in Melbourne, where he attended Daniel Andrews' daily covid press conferences. He has now left that job and our shores, pursuing some time exploring some of the planet's more far-flung places. He wrote to us from Tanzania, just having scaled the heights of Mt Kilimanjaro with some old GASS friends, and just prior to doing that he had been in Albania for a few weeks. After Africa Michael did some hiking in the Scottish highlands, before traveling to Peru, where he probably is as you read this!

If you want to catch up with GASSies and celebrate the 2022/23 scholarship recipients, don't forget to purchase tickets to the Victorian Gala and Presentation dinner on October 14 via the SAGSE website.

Town / city of exchange in Germany: Halle an der Saale

The first stint on the Autobahn is etched into everyone's memory, I think: zooming at 130 kilometres per hour, which felt like 180. I soon met the grandparents of my host brother, Alex, who had lived through World War Two and the DDR. With their limited English and my initially scratchy German it was difficult to communicate at first (despite plenty of goodwill). By the end of the exchange, I was able to understand their stories. That epitomised the value of GASS for me, having improved my language to the extent I could share genuine experiences with Germans two generations older than me - in a city I'd never heard of before my exchange!

Bachelor of Arts at Melbourne University, majoring in media and communications + Diploma of Languages (Spanish)

Soon after graduating in 2018 I was accepted into The Age and Sydney Morning Herald's journalism cadetship program. After cycling through topics, I moved down to Spring Street to cover state politics, just as Victoria's second wave of COVID began in 2020. That was quite the introduction! I attended many of Premier Daniel Andrews' 120 consecutive press conferences and saw my name on the front page far more than a young journalist would expect. Then in November last year I became City reporter.

I quit my dream journalism job in May to travel across Europe, Africa and South America. Consider me part of the "Great Resignation" generation! I always wanted one more opportunity to travel and the stars aligned post-COVID. Germany was one of my first stops and most recently I visited Tanzania for three weeks with four fellow GASSies: Felix Mosthaf, whom I hosted in Sydney in 2012 and Lennart Vogt, plus fellow Aussies Chris Janssen and Treves Li. We all share the itch to push ourselves towards new adventures, which this time led us to the summit of Kilimanjaro. That was even more difficult than a Wintercamp Frühsport session.

It undoubtedly has led me to my current position of travelling/being "funemployed", as I like to say! It unlocked my confidence to meet new people, push my boundaries and embrace the German spirit of travelling anywhere and everywhere. The exchange introduced me to some of my best friends in life and has brought me into contact with some of the most intelligent and ambitious humans I've met.

I'll always be über, über appreciative to SAGSE for such a life changing experience at a young age. It's worth it for everyone from host families up to sponsors, in my opinion.  And finally some self promotion - if anyone is after a freelance writer, sub-editor, media consultant or public relations rep then get in touch by emailing Michael at Fowler.michael08@gmail.com.