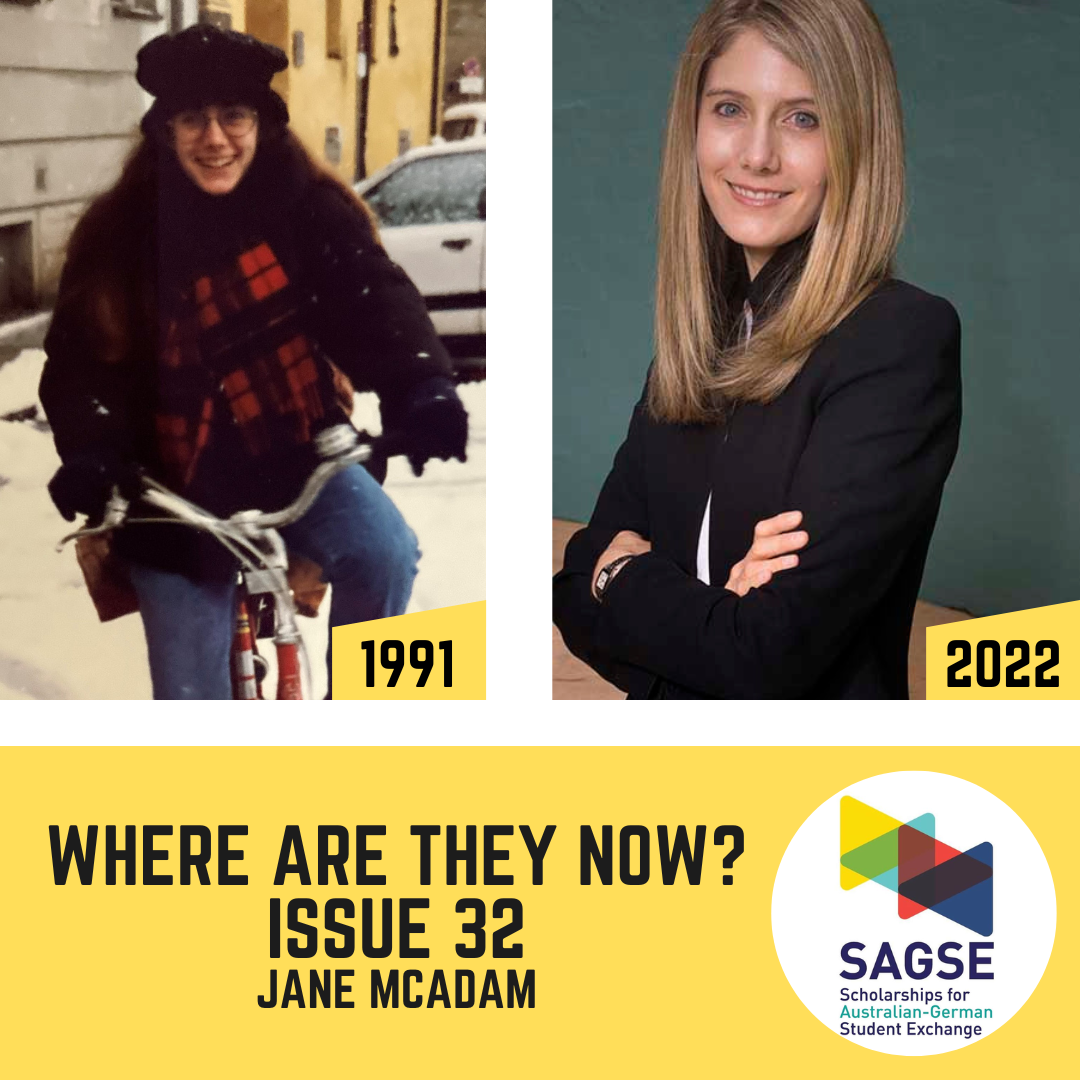 A look in our Past, Present and Future

This month's article comes to you from Sydney. Professor Jane McAdam AO was one of the NSW stipis of 1991, a couple of years after last month's Dan. After her exchange in Bavaria, Jane returned to Australia to pursue her passion and career in Law, returning to Germany as often as she could. She developed a particular interest in international refugee law, which led to her doctorate at Oxford University. Ultimately Jane's services in this field, particularly with respect to the displacement of people due to climate change and disasters, were recognised last year when she was appointed an officer of the Order of Australia. Jane is a Fellow of the Academy of the Social Sciences in Australia and a Fellow of the Australian Academy of Law, a Research Associate at Oxford University’s Refugee Studies Centre, an Associated Senior Fellow at the Fridtjof Nansen Institute in Norway, and a Senior Research Associate of the Refugee Law Initiative in London, and was previously a non-resident Senior Fellow in Foreign Policy at The Brookings Institution in Washington DC and a Visiting Professor at Harvard Law School. And by the way, Jane also met her life partner through SAGSE!

Being welcomed by my host family and encouraged to participate fully in school, choir, orchestra and other activities; being asked by the English teacher to physically demonstrate the meaning of particular verbs (such as ‘to reel’); sitting in French class and attempting to translate French, to German, to English; attending my host sister’s Year 7 classes for fun (and greater comprehension than my host brother’s Ancient Greek classes); cycling through snow; hitchhiking in an ice-cream truck when running late to the train station; accompanying my host brother (now a senior journalist at Stern) to interview a porn star for the student newspaper; sitting through a 9-hour production of Faust; attending anti-Fascism rallies; marvelling at real candles on the Christmas tree; foolishly insisting I could ski; making life-long friends.

I did Arts/Law at Sydney University, majoring in German and History, with my Honours year in German history. As an undergraduate, I co-wrote a book with some fellow History students, called Displaced Worlds, with my own contribution entitled ‘Letters from Passau: Reflections on Neo-Nazism in Contemporary Germany’. The methodology left much to be desired – I ‘interviewed’ school friends, teachers and my host family by letter (this was pre-email, Zoom, etc) about their perceptions of neo-Nazism in the early 1990s – but this was my first foray into academia, and I loved it.

I worked multiple jobs through my studies so that I could go back to Germany as often as possible – four more times between 1992 and 1996, including as Group Leader for SAGSE in 1995/96 and then to study at the Ludwig Maximilian University of Munich on a DAAD scholarship in 1996/97. Two history academics at Sydney University employed me to do research for them during a stint in Berlin, which saw me tracking down medieval literature for one, and collating materials from former East German feminist collectives for the other.

After I finished my undergraduate degrees in Australia, I worked for a year as an Associate to a Federal Court judge in Sydney – another formative and fascinating experience. Many of the cases concerned asylum seekers whose protection claims had been unsuccessful, and these opened my eyes to some of the protection gaps in Australian law … which ultimately inspired my doctorate at Oxford (after a six-month stint as a commercial solicitor in Sydney).

I am a professor of law and director of the Kaldor Centre for International Refugee Law at UNSW Sydney, which I founded in 2013. I research and write on international refugee law and forced migration, with a particular focus on displacement in the context of climate change and disasters. In 2017, I was appointed to develop UNHCR’s first institutional strategy on climate displacement, and I am currently drafting the first regional framework on climate mobility for Pacific governments. I have also advised governments on the creation of laws and policies to protect people displaced by the impacts of climate change, including in Australia, the Pacific, the United States and the Americas.   I am joint Editor-in-Chief of the International Journal of Refugee Law, the leading journal in the field. In 2021, I was appointed an Officer of the Order of Australia (AO) ‘for distinguished service to international refugee law, particularly to climate change and the displacement of people’.

The SAGSE experience had a profound influence on my life’s journey. It opened up my eyes to another world – it was my first time overseas – and exposed me to different people, ways of thinking and experiences. It created some wonderful friendships, both in Australia and Germany, many of which continue today across three generations (our generation, our parents and our children). In addition, the leadership opportunities GASS and SAGSE gave me as a school and university student were quite exceptional – it’s only in hindsight that I look back and marvel at some of the things we were given the responsibility to do. And I met my life partner, another GASSie (Ben Saul, 1993/94), so I guess that has influenced my life journey somewhat!

We would love nothing more than to see SAGSE NSW on its feet again. Any NSW-based people who share this wish and have some time, skills and passion to help make it a reality, please get in touch. There is a small group we can pass your name on to, in order to form a committee and ultimately have SAGSE registered in NSW once again so that more deserving NSW students can have such wonderful opportunities as Jane did. On our facebook or LinkedIn posts you can see some photos of excited NSW Stipis from Jane's year about to leave Sydney Airport. If you can name some of them, join our socials and put their names in the comments.