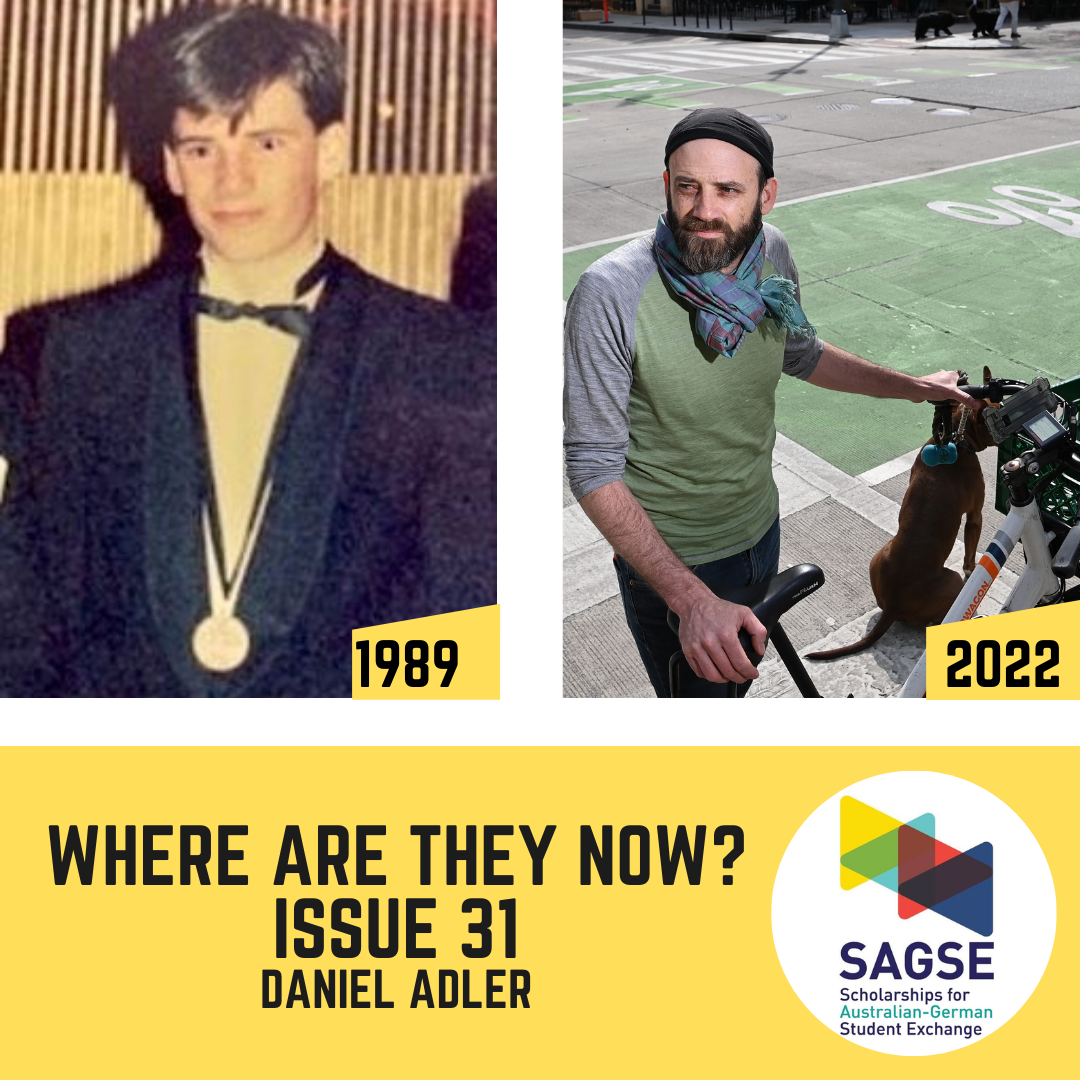 A look at our past, present and future - Daniel Adler

This month's edition takes us back to a critical moment in German and world history. A couple of weeks after Daniel and his fellow stipis were awarded their scholarships, the Berlin Wall fell. So Dan and co were in the amazing position to experience the state of flux the two German states found themselves in over the following months. These days Dan lives in Washington DC with his wife and two children. He heads up the unit that handles complaints from communities impacted by World Bank projects around the world. But recently Dan hit the headlines when he brought a truckers' convoy to a near-standstill as @dcbikeman.

Town / city of exchange in Germany: Tremsbüttel, a village in Schleswig-Holstein, between Hamburg and Lübeck. School at the Kreis Gymnasium Bargteheide.

Some anecdotes from your Exchange

My exchange group arrived in Germany just a month after the fall of the Berlin wall. I recall driving the 30 km from our village to East Germany for the first time with my host family the weekend after I arrived. I recall my host brother Didi putting endless hours into teaching me to pronounce a guttural "R" like a good north German. We would walk across the fields near his house, testing the ice on frozen ponds, him making up tongue twisters full of Rs and me trying to repeat them. By the end of my stay he awarded me the grade "mäßiger Fortschritt". Others have said my accent is pretty good. 😉

I also recall the night we were heading out to dinner with my host mum, Hanelore, and I commented that she was "sehr schön ausgezogen". Oops!

I studied Arts and Law at Melbourne with a major in German. During my studies I managed to get back to Germany for a semester at the University of Freiburg and a semester at the University of Lüneburg, followed by a memorable summer smoking syrupy Russian cigarettes and listening to the Pulp Fiction soundtrack, while driving a VW bus across Poland in search of Europe's last herd of wild bison with my host brother Didi Harm. While at Uni I was involved in the 'The Germanic Players' theatre group, writing, directing and producing plays in German. I even gave singing a go, playing Mackie Messer in Brecht's Dreigroschenoper.

After Uni I made a furtive attempt at corporate lawyering. Highlights of my legal career included representing the Howard government in their campaign against the dockworkers union and getting reported to my boss for turning up to court without a jacket on a sweltering summer's day. So I ditched the legal profession for a season as a skiing instructor in Austria and a stint with a dot com start-up in Berlin. In 2001, I moved to Phnom Penh Cambodia where I helped set up a local human rights law centre and worked on the establishment of a new labor tribunal before taking some time for further study at the IISJ in Spain's Basque Country. I then moved back to Cambodia for a job with the World Bank working on access to justice.

I live in Washington, DC with my wife Barbara and kids Otis (14) and Mango (11). By day, I lead the unit that handles complaints from communities impacted by World Bank projects around the world. In April I was in Pakistan investigating an anti-union discrimination complaint from workers at a hydro power construction project. By night, some call me @dcbikeman.

Here are some links: A piece from Pakistan TV about Dan's recent assignment there.

Article in the Washington Post about Dan's 'Bike Man' actions.

Similar piece from The Age / SMH.

Between my studies, friends, GASS, theatre, work, romance and travel, things German were big part of my early adult life. Then, working in international development, German turned out not to be the most useful language to have invested all those years in. French, Arabic or Urdu might have been better choices. Still, I credit my exposure to Germany as a 17-year old with an ongoing interest in European history and a love of long well-structured sentences.