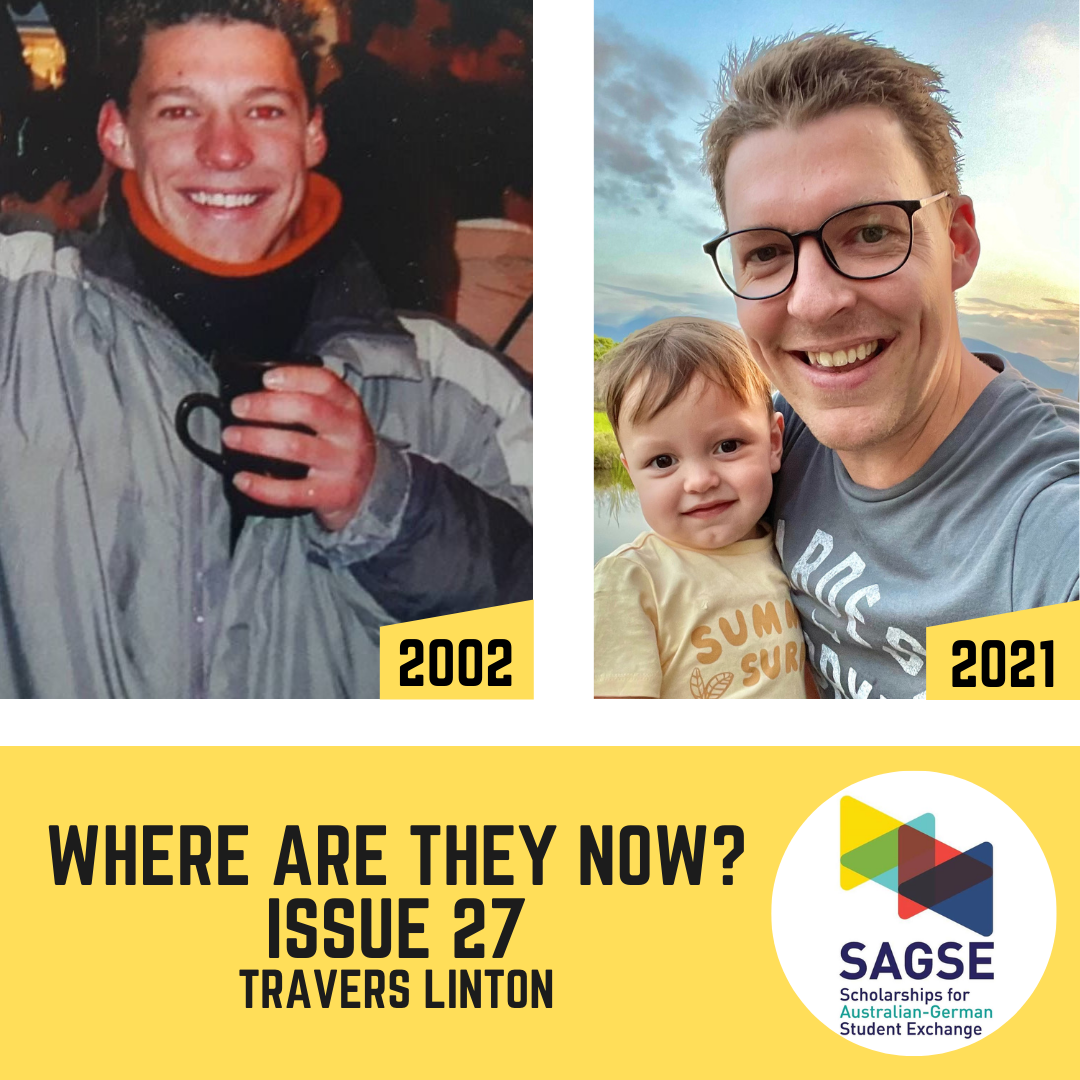 Where are they now? # 27 Travers Linton

‘Where are they now?’ Edition 27 goes back to 2002, when Travers Linton travelled from Melton to Meschede on his SAGSE exchange, sponsored by Siemens. On his return he pursued a study of Chinese, which led to long stays in Beijing and Taiwan, where he has lived for the last ten years and is raising a family.

A lasting memory  from your Exchange

One quote has stuck in my mind for nearly 20 years: "If  you want to get along with everyone in this town, you must say 'Veltins schmeckt besser als Warsteiner!'."

Following the SAGSE exchange, I returned to Melton then shortly after was accepted into the Royal Military College (Duntroon) to become an Army Officer. Unfortunately, I was medically discharged 6 months into training due to fallen arches. I then enrolled into Deakin University (Burwood) and after three years completed my Bachelor Arts degree majoring in Chinese.

During my studies, I went on another exchange to the National Taiwan University in Taipei, Taiwan. Following a short return to Melbourne and two years in Beijing, the best part of the past 15 years have been in Taipei.

In Taiwan I work for the Royale International Group, one of the largest independent courier companies in Asia with global reach. Acting firstly as their Taiwan General Manager, I have recently assumed extra responsibilities in supporting the Singapore branch as Southeast Asia General Manager.

I'd like to thank Warren for reaching out to me to contribute to the January 2022 episode of "Where are they now?" It's an honour and in this fast-paced world, it's nice to slow down and evoke some nostalgia. In fact, as I said in a recent conversation with my fellow Gassie, Ben Garrard, "nostalgia is just history after a couple of years... and now it's already a couple of decades!".

The SAGSE exchange had a very positive influence on my life's journey. Looking back on what was my first international flight, I still remember the searing pain of pressure building up in my ears as we landed into Frankfurt Airport. I'm still reminded of that feeling whenever I go scuba diving and I descend too fast... but I digress. Back to Germany, I arrived in Meschede to spend the next three months with Matthias Rittmeier, his father, and his girlfriend. A wonderful family who proceeded to add 5 points to my body mass index with the most lecker of local cuisines on a daily basis.

I was keen to experience all the cultural differences Germany had to offer a naive 18-year-old. I was a little  surprised when for one of my first cultural encounters, Matthias took me to a party which was hosted on school grounds with Lutheran brothers serving up  Veltins  beers to the 16-year-old highschoolers. Nothing like a local beer  to break the ice I guess, especially given the slippery walk home in 1 degree temperatures. Upon returning to the Rittmeier home and turning on the TV to watch their version of  Video Hits,  I heard one of the most beautiful songs I've ever heard:  Der Weg (The Way)  by Herbert Grönemeyer. Whilst the story behind this song is quite sad, I've long thought that art, especially music, provides a unique insight into language and culture. As well as giving me the travel bug, this exchange taught me how important immersion is in the language learning process. So whilst much of my German has been lost, it triggered a love for foreign languages and that brought me to my beloved second home in Taipei, Taiwan where I have resided for the past decade. My wife is Taiwanese and my beloved son, Clive, will grow up as a bilingual Taiwanese-Australian. I owe a lot to the SAGSE exchange for introducing me to my first foreign adventure.

Finally, I'd like to thank Frau (Marianne) Muecke who was my German teacher in high school. Her passion, discipline and strong control of the classroom were key factors in me choosing to learn German in the first place. I'm forever grateful for the love of foreign languages that it inspired.

The new year is the perfect time to take out or renew a SAGSE membership. We hope it will be safe to resume our Exchange Program this year, and whilst individual exchange scholarships are donated by the generous sponsors, we do also rely on memberships to cover our administrative expenses. So please visit our website  where you can pay your 2022 membership and while you are there, please consider making a donation towards the next SAGSE Alumni Scholarship.

For the first time, Edition 28 will feature one of the many SAGSE WA students who have gone to Germany over the years, thanks to the amazing Pamela Millar and her committee. This student went to Germany in 2009, and similar to Travers, pursued a passion for Chinese, working as an English teacher in China and a German and Chinese teacher in Australia!