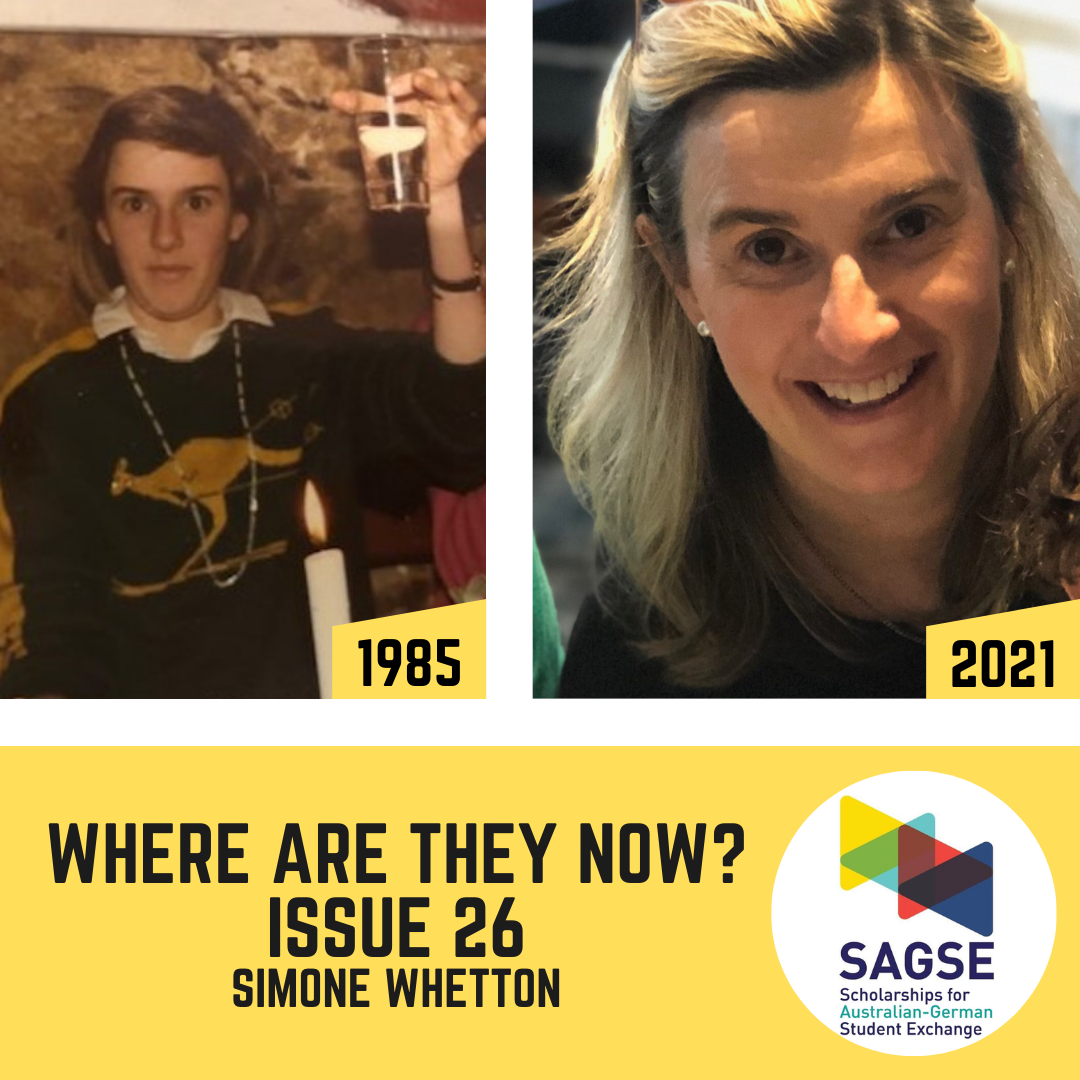 A look into our past present and future

Where are they now? Edition 26 - Simone Whetton

Ah, finally we go back to the 80's. Sydneysiders who listen to ABC Radio may recognise the name and voice of Simone Whetton, as she presents the What's On segments on the Weekend Show in Sydney. Back in the days of 'Rock me Amadeus' and mullets (the first time around), Simone went off to West Germany as of course it was then, on a SAGSE exchange.

Memories from your Exchange

- Dashing off with my host sister Ines Kampfl to Fasching Balls in Passau and wearing a wicked nun outfit (which some older Aussie Gassies tried to wear - talking to you Andrew Holden!!)

- Walking into the girls school in Passau in Niedenburg and asking if I could join their classes because I had heard it was a great school and had enough classes in the next door Gymnasium Leopoldinum!

- Dressing up for the midnight performance of Rocky Horror Picture Show in Berlin on the GASS Camp and getting off a station too early in fishnets and having to try and find each other again on the Berlin underground network.

- Playing cricket in the backyard with Tobias Meyer and Andrew Holden and Ernst Albrecht Von Moreau on Australia Day in the snow. (Editor's note: I did exactly the same 12 months later!!)

I went back to Germany at the end of Year 12 and did a Goethe Institut course in the beautiful Prien am Chiemsee before studying Economics / Law at Sydney Uni.

I took off a year during my university study and spent a semester at the Freie Universität Berlin studying law and staying with the Busch family in Berlin (who had hosted Thomas Jacobs a few years earlier). Eager to delay going back to Australia I also spent a further semester studying law at Passau University (including Bavarian water law - yes it truly was a subject- and no I never needed it). After being an associate to Federal Court judge Tony Whitlam, I accepted a position at Clayton Utz and established the German Desk. A few years later I won an Australian German Association scholarship (which author Anna Funder won too) and went to Mannheim to do a Business German course....

So lots of trips back to Germany over the years - including taking my children and living for a few months in Berlin while they went to primary school and were taught how to use matches in class (of course for lighting Advent wreaths!). I have been heavily involved with the German Australian Chamber of industry and Commerce and am on the Chamber Board. A highlight was a delegation a few years ago to Berlin with then Chamber President Lucy Turnbull, and taking her for a morning walk around some of the formerly seedy Berlin alleys, which are all now very gentrified.

Having maintained my German skills, I have worked for large law firms and acting for many German clients such as Lufthansa, Thyssen Krupp, Draeger, Hartmann and continue as a Board member of the German Australian Chamber of Industry and Commerce.

Still a lawyer and a partner at Colin Biggers & Paisley...  but my second job on ABC Radio Sydney talking about the arts is way more fun and feel free to tune in and give me some recommendations of any shows you see! The show is Sydney based although we also broadcast across NSW now and then and accidentally a few times into Melbourne and Canberra (when ABC Melbourne and ABC Canberra lost their broadcast feeds and the show had to come out of Sydney and I had to madly collate what's on activities in Melbourne and Canberra (a tough ask in Canberra...!).

The show focusses on what's happening in theatre, visual arts, ballet, opera, festivals, physical theatre and circus, classical music and film and I get to interview guests ranging from the NSW Governor Margaret Beazley about what Her Excellency was doing in Covid lockdowns to support the arts! (lots!) to artists Rhonda Burchmore, Trevor Ashley, David Campbell, Kate Mulvany, Ben Elton, Richard Tognetti, Tim Draxl, Lucy Culliton, George Gittoes, Simon Burke, Mitchell Butel and Darcy Bussell. So if you are driving through Sydney on a Saturday morning, tune in from 6.15 and get an update on what you can do over the weekend!

The arts is a big part of my life outside of my legal work and I adjudicate speech and drama sections each year at the Sydney Eisteddfod and am Chair of the physical theatre company Legs on the Wall and also on the Board at Griffin Theatre Company.

It totally sent me on the career path (for better or worse!) to where I am now.

It is so lovely to still be in touch with many Gassies from my year and others from a variety of years! Recently I was in Melbourne to see Moulin Rouge and caught up with Alison Ward and her husband Guy for a theatre night!

Editor's note: Simone was also a Committee Member at SAGSE NSW for many years. Sadly that body is no longer registered and it would be lovely to have them back. So any NSW based folks out there with skills, time and energy to spare, we'd love to hear from you.

We hope to be able to give the future generations of NSW students the kinds of opportunities that Simone and friends had.

Just send us an email at alumni.vic@sagse.org.au