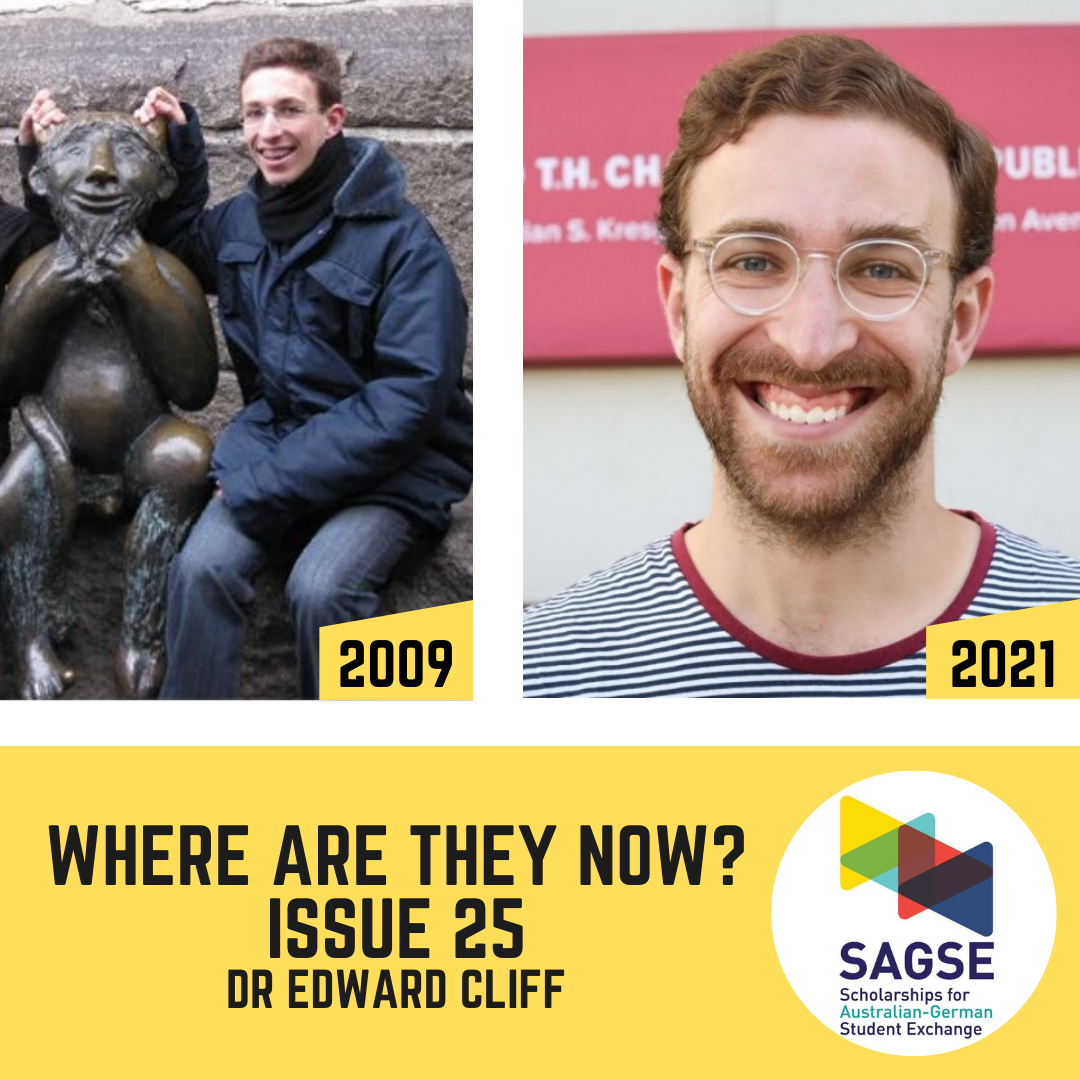 Back in 2009, Ed went to Wilhelmshaven in the far north of Germany on his SAGSE exchange, proudly sponsored by Siemens. Since his return he has studied Medicine at not only Monash University, but also Oxford and now Harvard. During his studies he also found time to travel back to Germany with SAGSE as Group Leader in 2013/14. These days Ed still speaks German, and he has been a SAGSE Victoria Committee member for many years. He sends his best wishes from Boston as he undertakes his Master of Public Health as a Fulbright Scholar. He recently co-authored an opinion piece which was published in the New York Times.

Memories from your Exchange

A snowy winter culminating in many snowball fights and building an igloo in the front yard with my Gastbruder Florian, visiting 30 Weihnachtsmärkte (including a floating one in Emden, and my favourite next to the Kölner Dom); Christmas traditions including our Adventskalendar which was one Kinderei every day!

Medicine at Monash University with an Honours year at Oxford.

A memorable trip back to Germany as SAGSE Group Leader in 2013-14 with 31 fantastic stipis. #dotheDaina #theleg #northeim #chinning. One memory was a nailbiting stipi (toy) horse race through a shopping centre in Berlin.

I have worked as a doctor, completing my medical internship and physician training at the Royal Melbourne Hospital and starting my haematology advanced training at the Austin (blood cancers and blood disorders).

I am on a Fulbright Scholarship studying for a Master of Public Health at Harvard in Cambridge, Massachusetts, thinking and learning about how we can use health policy to improve health systems to everyone's benefit. Interestingly, the aims of the Fulbright are very similar to those of SAGSE.

I learnt so much about my host family, German culture and the German language, and this taught me a great deal in turn about my family, Australian culture and (our version of) the English language. I still have a passion for languages, cultures and international collaboration and the importance of exchange in building mutual understanding.

I really hope that once it is safe again, SAGSE, GDANSA and GASS will be able to restart our exchange - it would be such a pity to end all of a sudden after 52 years, but it will take a concerted effort from all of us to get things off the ground again. Perhaps a flight you didn't take during the pandemic could go towards a flight for a stipi...

Editor's note: There are many familiar young faces in the photo on our socials! If you can name all the stipis pictured in Ed's 'von Stipi family singers', jump on to our facebook or LinkedIn pages and enter their names in the comments. And if you'd like to take Ed's hint and contribute some of that money you have saved by not travelling during the pandemic, get on to Alumni Membership, where you can take out a membership and / or make a donation to the next Alumni Scholarship. Or send us an email at alumni.vic@sagse.org.au

Stay tuned as we have a few candidates in line for upcoming episodes of 'Where are they now?' It could be somebody in Melbourne or Sydney, or out in beautiful East Gippsland. Or we could be back in the USA again, or Sweden, Taiwan, Dubai or Malaysia!