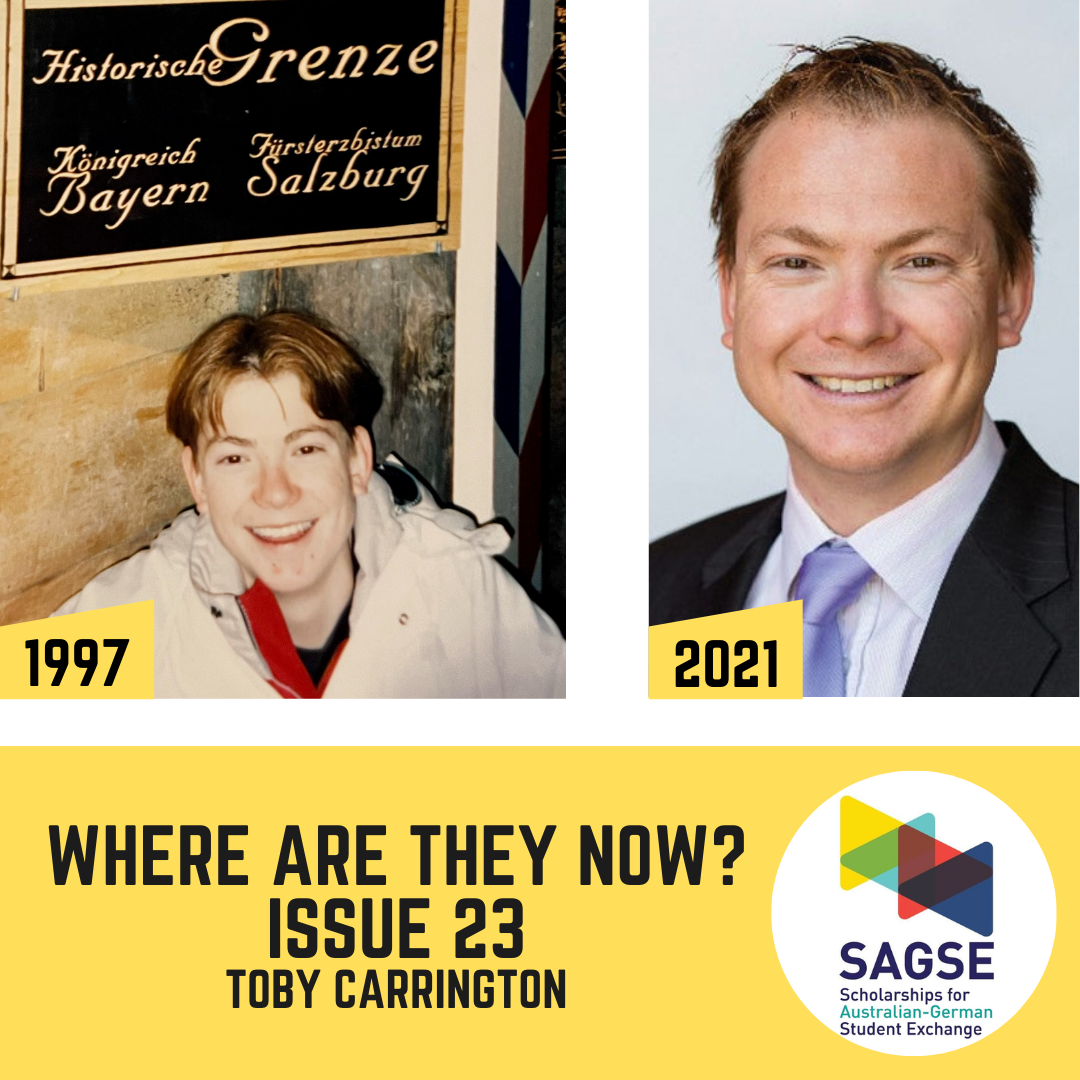 For the first time in a while we go back to pre-millennium. Toby went to Kiel on exchange in 1997, proudly funded by BMW. On return to Australia he studied German alongside Commerce plus some further study in Berlin. He has lived in a variety of countries including Germany, worked for Siemens for many years, married a German and ended up settling in the USA. These days he is in Austin, but when he lived in New York he played Aussie Rules footy with the mighty New York Magpies!

A memory from exchange:

I still remember the confusion on the looks of the faces of the people I had asked "Could you please help us, we are looking for the Zwinger?", while we were in fact standing in the main garden, of the Zwinger!

Bachelor of Commerce & a Diploma of Languages (German) from Monash University and then an executive MBA from ESMT Berlin.

Career path since then: I started my career working at a German company (Siemens, then also a SAGSE sponsor) and worked and lived in Australia, Singapore, Germany & the USA with different group companies for 17 years working my way up to senior levels as a Chief Financial Officer and in charge of global operational functions.

When I was living in New York, one day I dropped in to the NY Magpies to do some training for fitness. I ended up playing several seasons and being on the board. The Magpies play in the USAFL which, believe it or not, is the largest amateur sporting league and the largest AFL competition outside of Australia. We would travel the country and play footy all over. Every major city in the US and even some in Canada have a team.

What are you doing now? I now run revenue operations for a software company called Seismic, where I have been for 2 years. I am a board advisor and investor in multiple businesses across medical technology, financial tech, food and beverage and multiple other software start-ups. I live and work (remote) in Austin, Texas.

How the SAGSE exchange experience influenced your life's journey: My exchange completely altered the course of my life. Prior to the trip I wanted to be a physiotherapist. After the trip I wanted to work for a big German company and drive a fancy German car after seeing all the nice cars the BMW folks drove. So I went to work for Siemens, married a German girl I met once I was posted in Braunschweig and now I have a bilingual daughter who has family in both Germany and Australia. My career progression was helped significantly because of my German language skills and even in my current role is very useful – I recently did a webinar and presentation entirely in German as we have recently opened an office in Düsseldorf.

If Toby's story has inspired you to contribute to the next Alumni Scholarship, click on SAGSE Alumni membership / donations. Contributions will be retained until our Exchange Program resumes and we are able to award scholarships again. Join us next month as we head to the national capital to meet an alumna from the same school as Katie Hall who went on exchange with Mark Rowe. She now advises the Australian government on defence cooperation with Papua New Guinea.