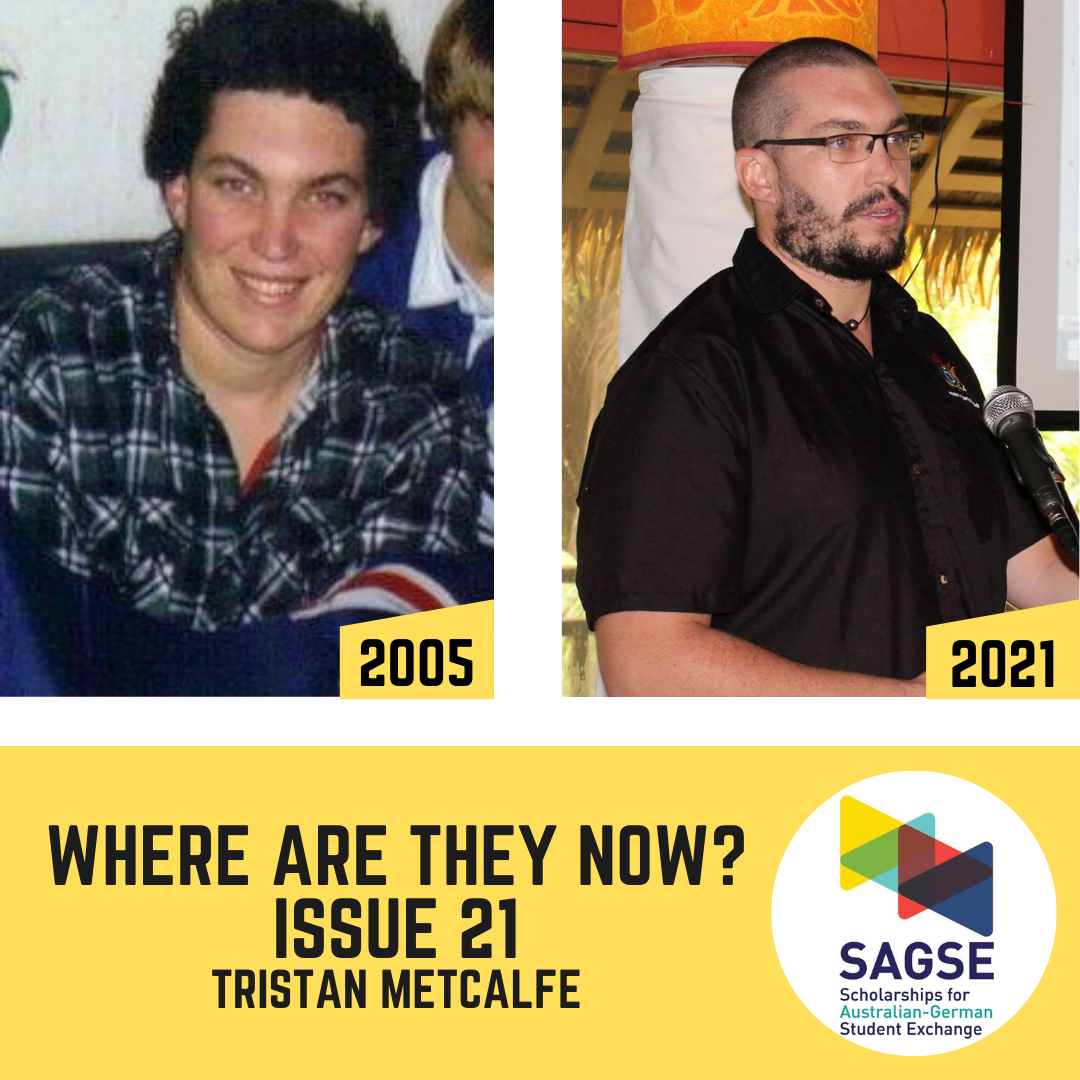 After last month's piece from Kyrgyzstan, we turn our attention to a very different part of the world. Stawell boy Tristan Metcalfe went on exchange to Neuenrade in 2005, but these days you might find him on a lagoon in the Cook Islands. Or in the halls of the Parliament House in Rarotonga advising the Prime Minister.

Memories / anecdotes from your exchange:

So many to choose from! Weihnachten with the family in the cold, Silvester with fireworks (while a bushfire was raging back home), coming from a town with one bus (that I couldn’t even tell you where it goes) to negotiating parts of the German train system to get around to Winter Camp and Free Travel, Kegeln with the ‘Men’s shed’ equivalent in Neuenrade – so many! If I have to pick one, I think it is the family trips to Iserlohn to the ice hockey – small stadium, packed full of rabid fans of a team that had really only ever been mediocre, but remained in the DEL. Honestly though, the whole experience was amazing – being able to immerse myself in the language did wonders for my German (given how rusty I am now, I clearly need to go back!), and being out of my comfort zone made me a more confident and outgoing person.

Throughout my undergraduate degree, I worked as a cadet accountant in a small firm in Ballarat – predominately doing income tax returns, business reporting and compliance. After finishing my degree, I decided to pursue a career in economics – which naturally led me to work in an abattoir back in my home town of Stawell for 18 months before moving to Canberra and ANU for my initial post-graduate studies (Graduate Certificate and Graduate Diploma). In 2013, I began working in the Australian Department of Finance as an economic analyst. After 2.5 years in that role, I took a job as an economist in the Cook Islands in mid-2015. After some movements of other staff there I became the Budget Manager and Economic Advisor – overseeing the national budget process and providing advice to the Finance Minister and Cabinet on a variety of economic issues.

In late 2016, my mental health deteriorated to a point where I returned to Australia for treatment and went back to completing my Masters degree and tutoring in economics at ANU, while working part time at the Department of Finance. Upon completion of my degree I took up a position with KPMG in their economic consulting business, providing analysis, modelling and advice to clients.

In early 2020, I planned to move back to the Cook Islands as a Senior Macroeconomist with the Ministry of Finance and Economic Management. Unfortunately, the pandemic complicated matters, so I spent 12 months working remotely from Canberra before I could arrange to get entry to the Managed Isolation and Quarantine system in New Zealand to get back to the Cook Islands. Since the end of March, I have been back in beautiful Rarotonga working on a rescue and recovery package for the Cook Islands economy which has been ravaged by the need to close borders during the pandemic.

My current role involves leading the macroeconomic forecasting for the Cook Islands as well as providing advice to the Secretary of Finance and the Finance Minister (who is also the Prime Minister currently). Outside of work, I spend time volunteering with both an ice hockey team in Canberra (CBR Brave) – though this is tougher to do from a distance – and the mental health charity, Beyond Blue. Coming back to island life has meant more swimming in lagoons, canoeing and sunsets on the beach than is possible in a Canberra winter!

The SAGSE experience changed my life in immeasurable ways. Firstly, it instilled the desire to travel and see the world – without which I wouldn’t be in my current job or living situation. It opened me up to other people and cultures I wouldn’t normally be exposed to as well considering I came from a small regional town in Victoria – including friends in my Jahrgang and experiences I would not have had otherwise. It also did wonders for my German language skills!

Secondly, I discovered the sport of ice hockey while in Germany, and that has led me to an obsession which ultimately resulted in my playing a part in the management team and leading opposition analysis and statistics for a national championship team in 2018. The CBR Brave won the world’s 3rd oldest ice hockey trophy – the Goodall Cup, which is played for in Australia each year.

I’d just like to plug the wonderful people at Beyond Blue – it has been a tough year for many of us, especially those with family and friends overseas who we are unable to visit, and if you are struggling at all – please reach out to someone for some help. There is lots of information available on the website at www.beyondblue.org.au or speak to a friend, or GP or anyone.