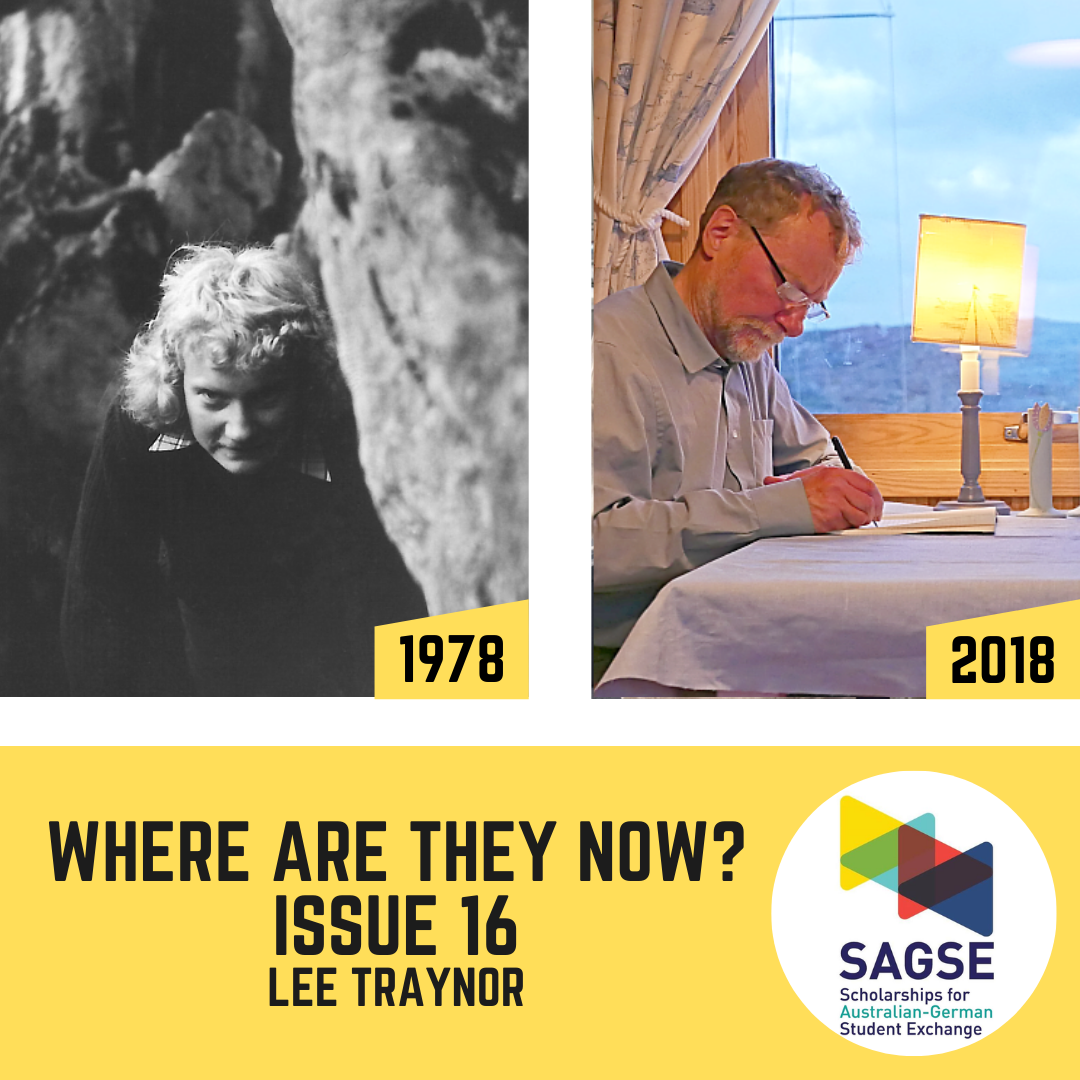 This month we look at someone who loved Germany so much, he made it his home. Lee Traynor went on exchange to Wuppertal in 1977 and nowadays calls Hannover home.

Town of exchange in Germany: Wuppertal-Oberbarmen. Pretty filthy industrial town then, but the scenic and snowy Sauerland was not far away. The picture of me exploring Felsenmeer, Hemer, Sauerland, February 25, 1978, was taken by host brother Andreas Schiller.

Memories from your exchange: Theatre, both the school theatre group and the professional theatres in Wuppertal, Cologne and Oldenburg, the access to many a performance was obtained by bribing the Hausmeister. Pina Bausch's Tanztheater, which changed my whole perception of ballet.

Watching the sun rise over the rim of the valley during a biology lesson.

Driving a passenger train from Oberbarmen to Essen (my host dad was a diesel loco driver and allowed me to operate the controls).

Visiting Stuttgart and the Daimler HQ in Esslingen with its car museum, that was then open by special request.

A trip to Paris in the days before free travel. Unofficially visiting a family in East Berlin, and hearing their side of things.

Studies on return from exchange: I went to Oxford later in 1978 and studied biochemistry and experimental psychology, completing an MA in 1982.

Career path since then: I moved to Germany in 1982 and work in the music/culture scene for a while. I was chairman of musa e.V. when we took over the disused army bakery in Hagenweg, G√∂ttingen in 1984 which has since become a major cultural venue.

In the late 1980s I was one of the first members of the German Skeptics, and began to become interested in science communication. In the 90s I produced a couple of books in German with Michael Shermer, and helped found the European Council of Skeptical Organisations.

What are you doing now? In 2002 I was appointed to a lectureship in English at the Leibniz Language Centre of the Leibniz University, Hannover where I have been ever since.

I have the privilege at the end of semester of telling my students to practise ultimate physical distancing, and some do make it to Australia or New Zealand. A few years ago one student, who I suspect was still living with her parents, managed to organise an exchange year for herself at our partner university in Wollongong. I saw her on the tram when she had come back, and she immediately came over to me and struck up a conversation with me about her year down under. For her, being in Australia must have been quite a learning curve.

I am also active in the university sports centre (Zentrum für Hochschulsport) where I occasionally supervise the weekly practive round for river kayaking. In 2018 I was a member of our first sea kayaking expedition to Western Sweden, which was entirely organised and run by students.

Travel gives you opportunities and you learn to spot them. I was lucky enough to have a second language in addition to a second passport (Irish), and that allowed me to work in Germany while I was studying in England and afterwards. Margaret Thatcher's Britain had few jobs for students or fresh graduates. I worked in Wuppertal in the summer of 1980 earning DM 10 an hour, which was three times the amount I might have earned working in college as a scout (domestic servant).

I kept a diary of the exchange trip, which was written in a travel diary originally started on a trip to New Zealand in 1974. I now have dozens of volumes of travel and other diaries, and they remind me of who I once was.

Memberships keep SAGSE running, in addition to the generous corporate sponsors. Even in our current enforced break from actual student exchange, our administrative expenses continue and we will need a solid financial footing when we do re-commence exchange in an uncertain world. Of course we will return to offering alumni-funded scholarships, which require not only memberships but donations too. So please become a SAGSE member and consider making a donation as a way of giving a little back, allowing another young Aussie student the chance to embark on an experience maybe a little like Lee's. Wouldn't it be great if we had enough donations to offer two alumni scholarships when the exchanges resume?