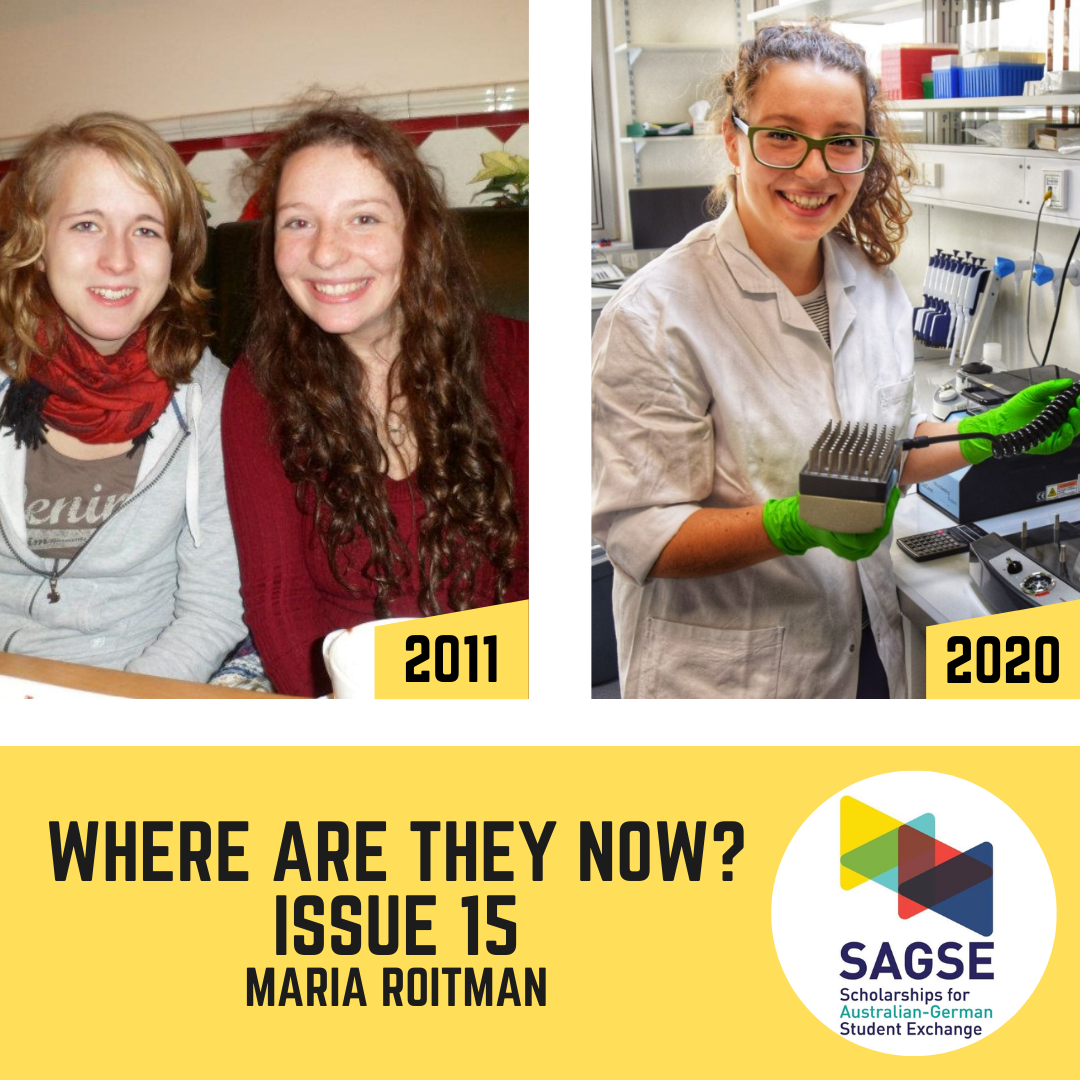 A look back as we look forward to a new year

Normally we would be sending you some updates at this time of year from our Alumni-funded Stipi/s over in Germany. Sadly that is not possible this year, but we take pride in continuing with our series of 'Where are they now?' Maria is known to all of us as Masha, and is very active in the SAGSE and broader German-speaking community. She was SAGSE Group Leader in 2015/16 (photo above), was instrumental in organising our Gala Dinners from 2014 - 17, and has retained both personal and professional connections with Germany. Interestingly, her German connections even took her to Sydney to meet the German President, to Barcelona and Boston for host sibling reunions, and to Buenos Aires for her host sister's wedding!

Town in Germany: Schwarzenbek (near Hamburg)

Memories from your exchange:

I can't believe this year will be my tenth anniversary of going on the exchange! I have many fond memories: hardly believing my luck at recognizing Xavier Naidoo on the radio on the car-ride home from the airport; settling into a family with a single mother where I was the fifth (!) sibling; cycling to school in the dark for 7:30 am starts; dancing in my very first club with my host mum's permission slip in hand; degustating the many mysterious and delicious goods at the Christmas markets; opening windows in two different directions (!!); slowly improving at articles and verb conjugations; getting an irresistible taster of independence; failing at Flunkyball; and sparking my love and appreciation for Germany, its people, and the quirks of their Lebensweise.

Bachelor of Science with Honours, and a concurrent Diploma in Languages in Spanish and Latin American Studies at the University of Melbourne. My exchange semester in Spain gave me another excuse to pass through Germany to see my host family and friends. I also developed my interest in international relations through several Model United Nations conferences, including one in New York which also allowed me to catch up with one of my host siblings who was au-pairing in Boston at the time.

Career path:
While studying, I worked as a Research Assistant at a molecular ecology lab in Monash, as well as my neuroscience lab at Melbourne. After finishing my Honours year, I spent three months at the Max Planck Institute for Psychiatry in Munich researching the neuroscience of stress-related disorders supported by the Australian-German Association Fellowship. This research stay not only gave me a leg up in my science career (with a PNAS paper published), but also helped me clarify my career direction and gave me the chance to meet people who have helped me along the way. I chose to move away from the bench-top, and use my research experience in the policy and strategy direction, which has led me to my current position. I've also continued with my freelance film production work, and have recently co-founded Foundry Films as a side-hustle to my full-time job, which specialises in pitch videos and creative shorts.

My globe-hopping in pursuit of the right career has led me right back to the University of Melbourne where I now lead a team in international research strategy. We have an immediate focus on Germany as one of our priority countries, and build partnerships with research institutions abroad to help our researchers collaborate internationally. Prior to COVID-19 this involved a lot of travel, and much time spent in Europe. My film work has been quiet during the Victorian lockdowns, but we are looking forward to picking up work again with a few Melbourne-based start-ups in 2021 ‚– and always keen to discuss prospective project ideas!

1. Life skills ‚– it taught me independence and empathy, and helped me grow up.

2. Passion for languages, intercultural communication and travel ‚– which I've taken into my studies and which has moulded my career.

3. People - most of all, the exchange connected me to my host family and friends whose generosity continues to be unending and whose friendship, love, and support has shaped me as a person.

I cannot thank my host family enough for taking me under their wing in 2011, and continuing to do so ever since. It's been a pleasure and a privilege to be a part of their lives and see my host siblings grow up over the last decade. We last met in Argentina in October 2019 for Shawnee's wedding. Here's to many more decades and a physical catch-up in the not-so-distant future!