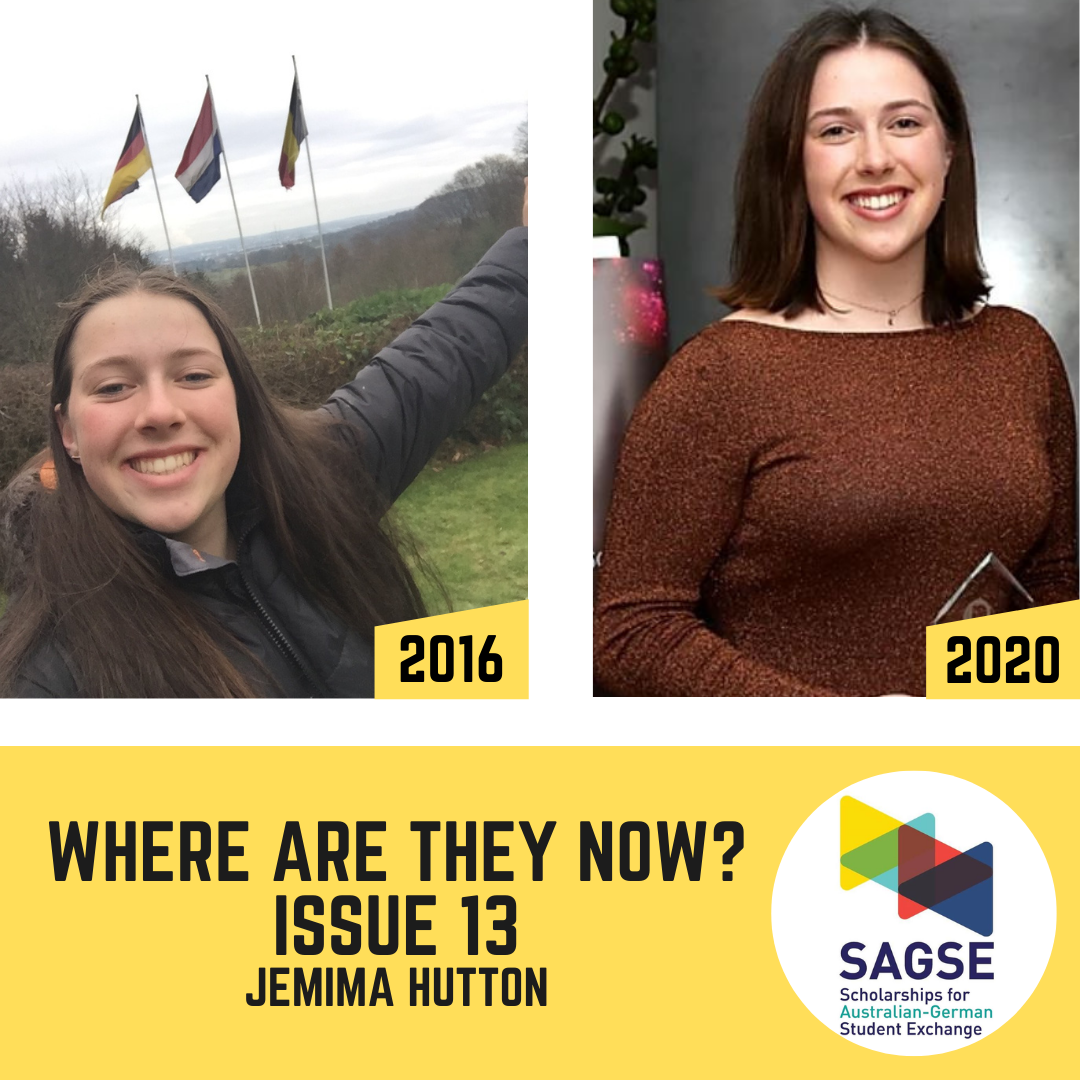 A look into our recent past!

This month's publication looks at by far the youngest of our alumni to date. Jemima went on exchange a mere four years ago and only did her VCE in 2017. As you will read below, she has certainly made the most of the three years which have passed since then, setting up her own business and being nominated for some prestigious awards.

The Interview with Jemima

Town / city of exchange in Germany: Kleinsendelbach, near Nürnberg / Nuremberg

A memory from your exchange:

It was my very first time getting the bus back from school on my own. After catching the wrong bus and getting lost three times I finally arrived at my host family's house. It was freezing cold and I was desperate to get inside, but as I pushed on the door, the glass panel shattered onto me, cutting my knee. I had never felt so guilty in all my life! My host family wasn't home yet, and so I had to witness each one of their reactions as I tried to explain each time they came through the front door. When I told my parents back in Australia they were initially very forgiving, telling me that 'accidents happen' and that they would help me pay to replace it.....they were not so forgiving when they found out the door was custom made.....costing around 600 Euro!

I completed my VCE in 2017as Dux of my school, and had my heart set on studying Medicine at Monash, so when I didn't quite get in I accepted an offer of Medicine at the University of Queensland. I took a Gap year in order to do some part-time jobs to save up for the move interstate, such as nannying, being a lifeguard and tutoring. In 2019 I commenced studying Midwifery as my Pre-Med studies.

During my gap year I thought a lot about the lack of support there was in schools for students with dyslexia like myself. By May I decided to set up my own business, Dyslexia Demistified. I went into schools, presenting Professional Development for staff and running workshops with students and parents. We provide a 1-on-1 mentoring service for students, and focus on awareness and strategies for dyslexic students, their social support and assistive technologies. I also started my own YouTube channel and started creating lots of video resources which dyslexic students and those who support them can access for free. I was a finalist in the 7 News Young Achiever of the Year Award and won the Foundation for Young Australians Jumpstart Unleashed Award in 2018. Ultimately I would like to be an obstetrician in a rural area, potentially with the Royal Flying Doctor Service.

I am balancing my business with my study commitments. I do a lot of work with bodies such as Vision Australia, evaluating apps with the goal of making such interfaces and processes more dyslexic-friendly. My business now has a small team, and we continue to mentor students, do keynote speaking and add to our video resources.

How did the SAGSE exchange experience influence your life's journey?

I learnt a lot of life skills on exchange in Germany and feel like it turned me into an independent adult quite quickly. I gained a global perspective. Being the only Australian student in my area, I had to be resilient, self-sufficient and confident, important qualities when it came to moving interstate on my own to study.

Thanks to JX for being an unflappable Group Leader and not being too cross with our Free Travel group when we accidentally stayed on a bus for one stop too many in Aachen and broke the rule about not leaving Germany, completely inadvertently!

We'd love to have your contribution

It has been a tough year for everyone, but we at SAGSE are determined to keep our program running successfully, so that more bright young people like Jemima can have this life-changing experience. An important part of the exchange is free travel, and you can see Jemima's group embarking on that in this photo. As a former 'Stipi' you can visit https://www.sagse.org.au/membership-subscription-Alumni where you can take out / renew your SAGSE membership and / or make a donation to the SAGSE Victoria Alumni Scholarship. Our goal is to continue to send at least one scholarship recipient per year, fully funded by alumni donations, and every bit helps.