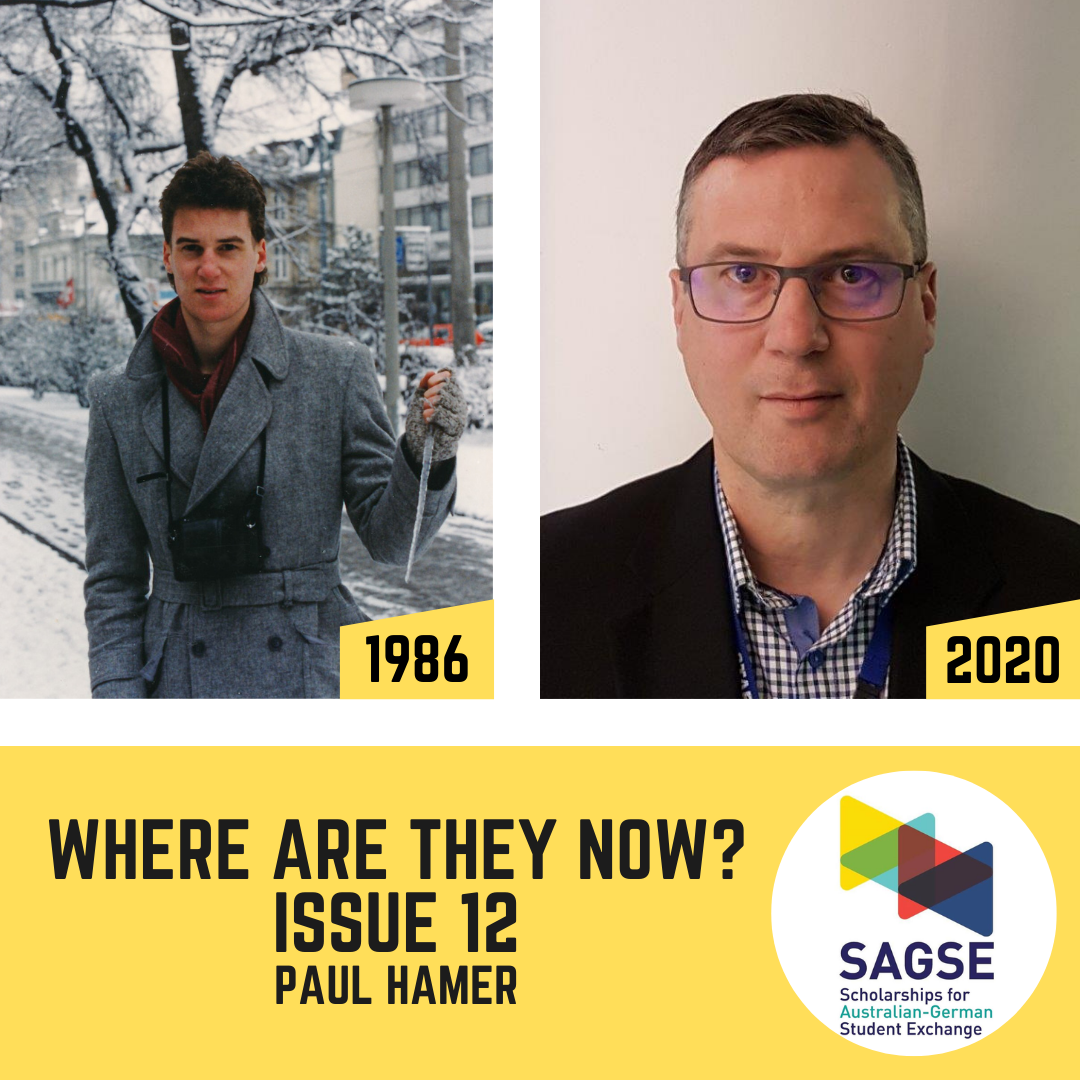 A look into our past, present and future!

This month's publication offers a look across the Tasman, in celebration of our long association with New Zealand. Paul went on exchange in 1986/87, and has maintained his connections with Germany and Australia in the interim years. He has also learnt some MƒÅori and forged close connections with their communities, both in New Zealand and Australia, through his professional life.


An Interview with Paul

Town/city of exchange in Germany: Hamburg

Memories from your exchange:  I got to see so much: Cold War Berlin, as well as a trip to the south of the DDR with my host family to visit my host father's parents; hopping across the border into Basel, where the photo on the left was taken by fellow Kiwi stipi Stephen Judd.

I was probably a bit of a disappointment to my host brother, who was passionately into rugby, whereas I played football (soccer). I went to one or two trainings with his Hamburg rugby team, and I think they thought I was okay because I knew how to drop-kick.

An anecdote:  I went to my host brother's school, and must have blended in to some extent. Once, when I was once leaving school, by the normal exit, I was confronted by a teacher. The conversation was quite funny, in hindsight, and has always stayed with me: Teacher: ‚‘Der Ausgang ist dort drüben.' Me: ‚‘Ich wusste das nicht.' Teacher: ‚‘Du wusstest das nicht? Du bist aber auf einem Gymnasium. Gewisse Intelligenz geh√∂rt dazu.'

Career path since then:  Through my study of New Zealand history, I began working for the Waitangi Tribunal in the early 1990s. The Tribunal is a permanent commission of inquiry that looks into MƒÅori claims about Crown breaches of the Treaty of Waitangi, and makes recommendations to the Government to settle those claims. I've worked at the Tribunal in one capacity or another for nearly 20 years, and in January this year I was appointed as an actual member of the Tribunal. I also worked for several years for the Ministry of MƒÅori Development, and through this was a visiting fellow at Griffith University in Brisbane in 2006, where I wrote a report about MƒÅori migration to Australia. I eventually converted this longstanding interest into a PhD at Monash, which looks at the exclusion and inclusion of MƒÅori in Australia since federation. I speak a bit of MƒÅori although sadly it's still not as good as my (rusty) German.

What are you doing now?  My current job is at New Zealand's Department of Corrections, where I'm the principal advisor in the MƒÅori strategy team, although I will start to work more for the Tribunal again soon as I get appointed to Tribunal inquiries.

How did the SNZGSE exchange experience influence your life's journey?  I think the whole experience gave me immense confidence and a desire to see more of the world. I travelled a lot over the next few years, including to Australia, but mainly back to Germany at first, including a two-month German language and studies course at Freiburg University in 1990 (funded by the German Academic Exchange Service). Then a few years later I had a longer spell of travelling and working in Europe and beyond. By 1990 my German was pretty good, and I could have gone on to do post-graduate studies in German, but I opted to go a different path. I don't regret that, but I'm still hugely appreciative of the opportunity the exchange experience gave me.

If Paul's story has reminded you of anyone from your exchange year, regardless of which state or country they came from, please send an email to the SAGSE Alumni Officer at alumni.vic@sagse.org.au . Maybe we can persuade them to tell their story in next month's edition. However, there are other ways for you to give a little back. As a former 'Stipi' you can also visit

where you can take out / renew your SAGSE membership and / or make a donation to the SAGSE Victoria Alumni Scholarship. Please help us achieve our goal of sending at least one scholarship recipient per year, fully funded by alumni donations.