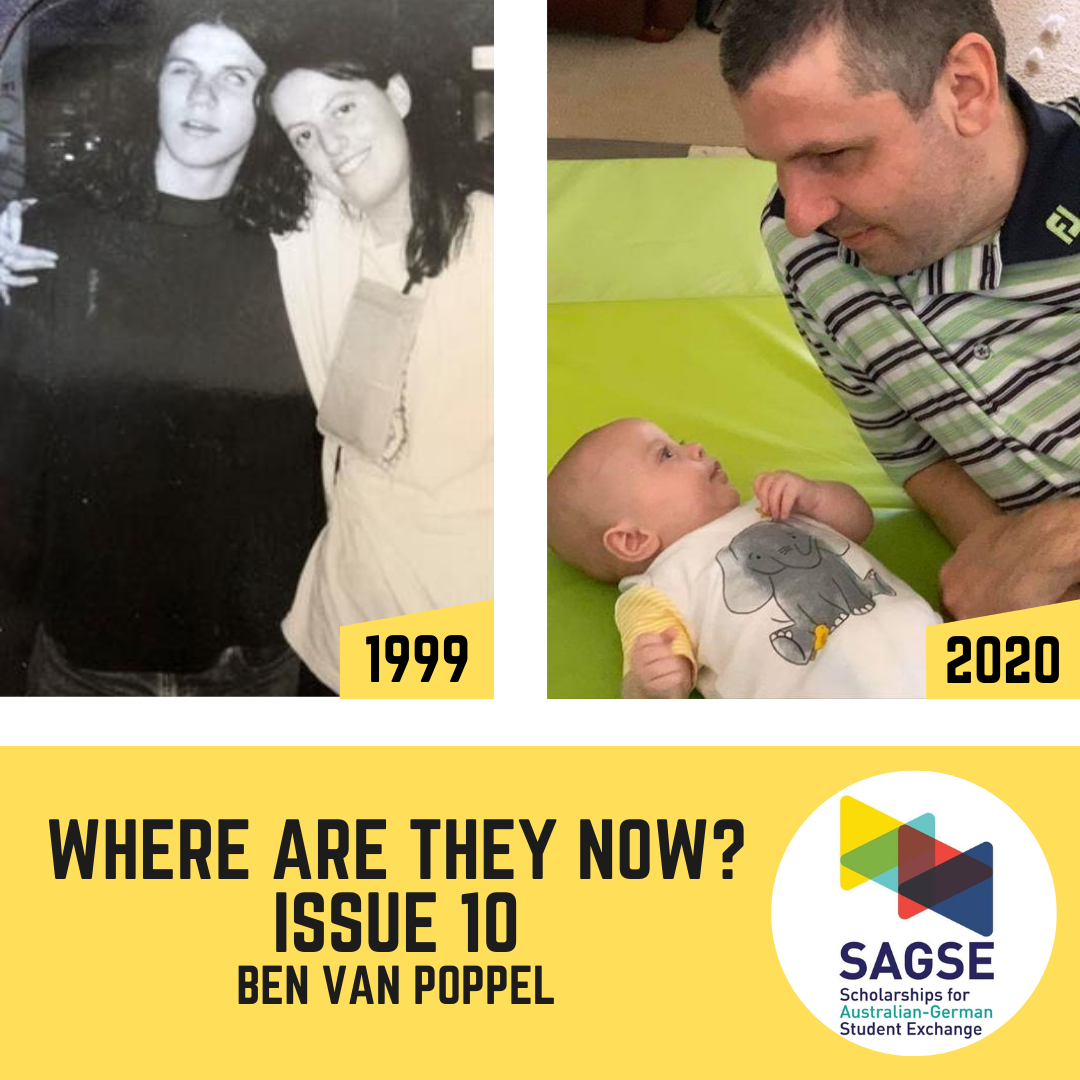 Ben is pictured, on the left, with fellow stipi Louisa Willoughby, about to depart Germany to return to Australia, and, on the right, with son Max.

This month's publication offers a look back to just before the turn of the millennium. Ben van Poppel grew up in the tiny town of Glengarry in Gippsland, where he completed his VCE over 3 years in nearby Traralgon. He hosted Christian Weber from Berlin through SAGSE. As Christian thus became accustomed to living with a blind person, he then offered to host Ben, when he was subsequently offered a scholarship.

An Interview with Ben

Memories from your exchange: Getting around Steglitz and surrounds in the snow with a white cane - very different navigating experience.

Being paid DM10 to play the Titanic theme on the tin whistle while I waited for a lift on Alexanderplatz.

Studies on return from exchange: Finished VCE, then B.A. at Monash majoring in German and linguistics.

Career path since then: Gave music lessons (kit/violin/voice) and tutored upper secondary German and English until I was 31. Played gigs and recording sessions (same instruments more or less).

Went back to uni and did LLM(JD) (also Monash). Admitted as a lawyer 2016, but instead of practicing entered the ACCC as a graduate. Now on the Advocacy and Law Reform team within the Special Enforcement and Advocacy division.

What are you doing now? Married since 2014 and now full-time father of six-month-old Max. I'm currently on extended parental leave until next year.

How did the SAGSE exchange experience influence your life's journey?

Coming from a regional part of Victoria, the experience provided a taste of life as a global citizen and a person in the wider world. As a totally blind teenager it broke some chains that needed to be broken and set the standard for the freedom I had a right to expect as a young adult. My host family came all the way to Australia to be guests at my wedding. Later I was able to play tourist guide for my wife in Berlin. It created life-long ties with people who are essentially extended family, even when it's years between visits.