The Status of German Language Education in Victoria 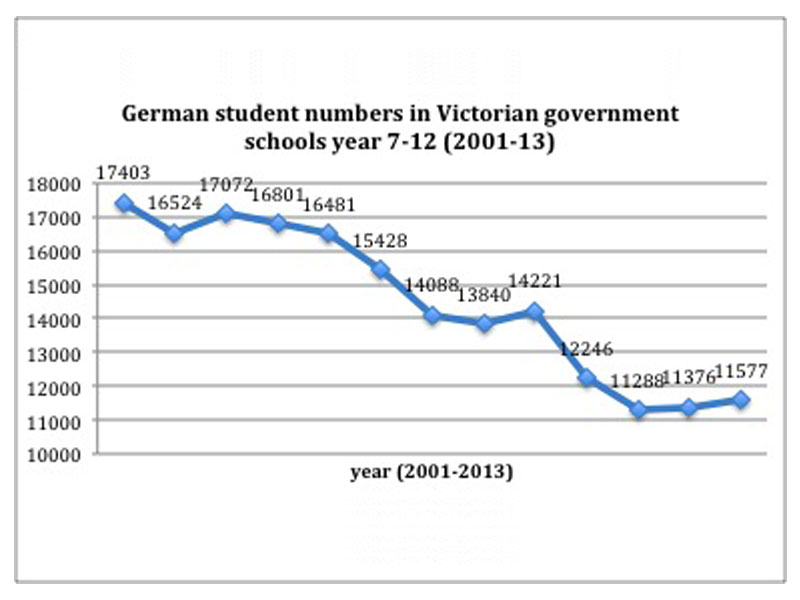 The Status of German Language Education in Victoria

SAGSE is unique in offering school students learning German a lengthy, funded stay in Germany. The scholarship offers benefits for students’ German language skills, social competency and introduces them to other high-achieving students with similar interests. The enduring friendships built via SAGSE and GASS are not only of personal but also of professional benefit to students for years after they return from Germany. SAGSE is rightly proud of the record of achievement of its former scholarship recipients. For this reason, SAGSE is attentive to questions of educational inequality in Victoria and how this unavoidably impacts on the work we do. The SAGSE committee and selection panel is in constant dialogue on matters of equity in relation to the award of scholarships.

In order to understand the magnitude of the challenge facing SAGSE in awarding scholarships on merit, whilst paying attention to questions of equity, it is worth considering the changing face of German language education in Victoria.

Among the students eligible to complete Year 12 in 2014, just 17.6 per cent completed year 12 studies in a language other than English (LOTE). In total, 38 languages were studied at this level, with the five most-studied languages at VCE level being Chinese (Mandarin), French, Japanese, Vietnamese and Indonesian. Just 6% of those who studied a language to the end of year 12 chose German. Moreover, VCE German numbers are in decline, having decreased significantly and steadily from 874 students completing VCE German in 2001 to 669 students in 2014.

The decline in German student numbers has been most pronounced in government schools, as the graph shows. Indeed, while German students numbers at secondary level have been holding steady in independent schools, they have fallen drastically in government secondary schools: (http://www.education.vic.gov.au/Documents/school/teachers/teachingresources/discipline/languages/2013Languagesreport.pdf)

This trend is linked to a decline in the number of government schools offering German language, which has almost halved from 99 in 2006 to 54 in 2014. Little wonder that students from independent schools now dominate VCE German enrolments. This means that SAGSE faces a growing challenge in selecting scholarship recipients from government schools and from a wide range of socio-economic backgrounds. It is a challenge that we continue to discuss and approach proactively.

While these figures from secondary schools make for disappointing reading, there is some good news for German language education. At the Victorian universities that teach German the language is undergoing somewhat of a renaissance. Numbers are up across the tertiary sector, perhaps in part due to the diminishing opportunity to study German at secondary level. Whilst German enrolments at secondary level dropped by around a third from 2006-2014, enrolments at University first-year level have increased significantly.

In 2015 RMIT University enrolled more than 50 students in its beginners German program, Monash University had over 150 German enrolments and the University of Melbourne had close to 300 first-year German students, of which 200 were beginners. These growing numbers in German at tertiary level show that interest in German-speaking Europe and the German language are not in decline, despite the waning of German in secondary schools. To some extent the continuing interest in and demand for German is shifting from secondary to tertiary education. Of course many of our scholarship winners go on to study German at these universities and to play an active role in the German student body.

As SAGSE moves forward we must continue to assess how we can fulfil Fritz von Einem Joosten’s vision in a changing world. For us, this means a decline of German in Victorian government schools, but also greater international mobility of school students with most schools with strong German programs now offering their own Germany trips. As SAGSE continues to select a number of outstanding young people for this life-changing experience we look forward to seeing how they make their own mark on our changing society.