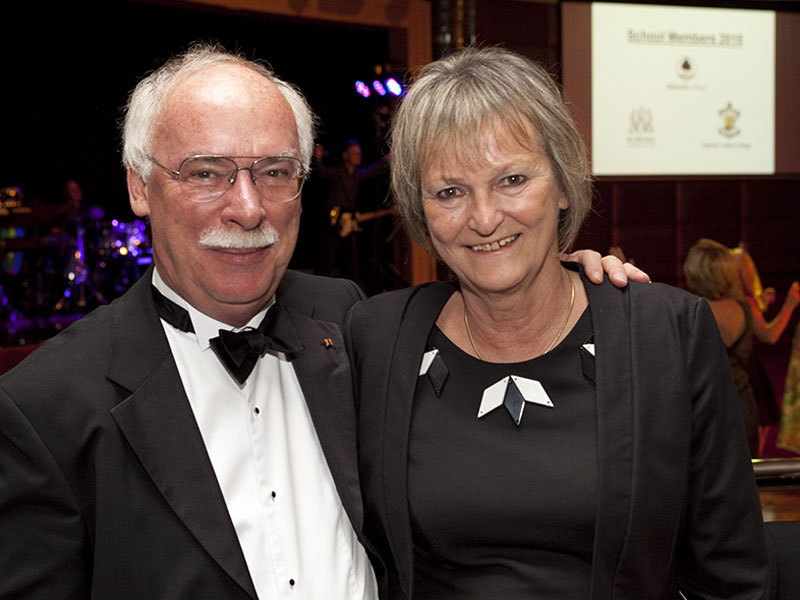 At the SAGSE AGM earlier this year, Egon Vetter retired from the SAGSE Committee after fifteen years of dedicated service as the President and, prior to that, many years as a sponsor and avid supporter of the organisation. Those fifteen years brought with them numerous challenges and highlights for the Society, and Egon steered us through all of them with determination and vigour.

His term as President began in 2000, on the cusp of an era where litigation and over-regulation were making themselves felt in many areas, and which dramatically increased the workload and expectations for members of the committee. Like all committee members, Egon volunteered his time and energy, and it is a testament to his good will and time management skills that he cheerfully took on all the additional work these new demands created. Despite the constant addition of rules and regulations not known in the past, Egon diplomatically maintained good relations with the VRQA, encouraging robust discussions to ensure that guidelines and expectations also took into account the real world in which we operate.

Major societal changes around the globe have also had a dramatic impact on how SAGSE responds to the needs of its stakeholders over the years, and Egon has ensured that SAGSE remained on the front foot at all times. The changing landscape of German teaching  in Victorian high schools, the increased global mobility of our young people, increasing competition from other opportunities now available to young people, a range of financial crises including the GFC, even the rise in noble causes competing for people’s attention in terms of volunteering and assisting others – all of these factors have increased the complexity of issues SAGSE has to deal with on a daily basis. Egon never let this dampen his enthusiasm, and he was constantly on the lookout for new sponsorship and memberships to support the ongoing success of this exchange program.

One of Egon’s most notable achievements as President has been to double the number of sponsors. Ably assisted by his wife, Angelika, who has dedicated a comparable amount of time and effort to SAGSE, relations with sponsors have been strengthened and expanded. Angelika eventually formalised her extensive involvement on the sidelines by joining the committee in an official capacity, and has reigned over many successful Presentation Banquets, as well as taking on numerous other administrative tasks and portfolios over the years. In particular, it was Angelika who brought a more corporate approach to many of our operations to ensure we remained competitive and “aktuell”.

The SAGSE committee relies heavily on the efforts of its past scholarship recipient organisation, GASS, to manage many functions of the exchange, such as host family relations, marketing to schools, fundraising and a swag of social events designed to support the exchange students during their visits. Egon and Angelika recognised the importance of the two committees working cohesively together, and the annual BBQ/pool party at their home became the most anticipated event on the social calendar for those in the know. Both Egon and Angelika enjoy the company of young people, and through the work they did together, have developed long-lasting friendships with many of them. Working with Egon and Angelika on various portfolios, such as the Banquet, has also provided many of our GASSies with insight and access to skills and knowledge that have assisted them in their own careers.

Egon’s most significant achievement as President was, however, the resurrection of our German partner organisation, GDANSA, when it collapsed without warning. In the early 2000s, Egon was alerted to the fact that the GDANSA committee had entered troubled waters and that committee members had virtually overnight made the decision to disband the organisation. By the time Egon became aware of this situation, most of the paperwork had already been destroyed. Had he not taken action immediately, the death knell for SAGSE would have sounded shortly afterwards. However, Egon took the proverbial bull by the horns and flew to Germany in search of a few dynamic young GASSies he knew personally, in the hope that he could convince them to take on the challenge of building a new GDANSA committee from scratch. This single act, and the willingness of this group to take on that challenge, enabled both SAGSE and GDANSA to carry on their good work, ostensibly without a hiccup. To anyone outside the organisation, it was business as usual, but those of us who saw Egon in action during that time know how close SAGSE came to vanishing, and that he single-handedly had the vision and determination to turn this situation around.

Any organisation that deals with such a wide variety of stakeholders and challenges across multiple continents will inevitably attract some criticism from outside and SAGSE has been no exception to this, but under Egon’s guidance the Society has steadfastly maintained its focus on Fritz von Einem Joosten’s original philosophy whilst making adjustments as appropriate to account for the changing needs of the modern world. New relationships have been forged, old ones strengthened, and he leaves the organisation in a very strong position to continue its good work well into the future.

On behalf of all members of the SAGSE community, we extend our sincere thanks to Egon for so many years of outstanding service to this Society, and our best wishes for the future. We hope he and Angelika enjoy reconnecting with the concept of “spare time”. It goes without saying that Egon has recently been awarded Life Membership of SAGSE, and we welcome his continued involvement.